Realizing that the stakes are very high, there are only three tickets to the World Championship, not to speak of the substantial money prize – the Grandmasters played very accurately.

The ex-World Chess Champion Ruslan Ponomariov chose the Spanish Defense to answer the first move of the King’s pawn. On move three he offered to change to the Berlin endgame which earlier secured a victory to him in the quarterfinal match against Gashimov. The Russian Champion Peter Svidler evaded the Queen exchange but Ponomariov was well prepared for such development. 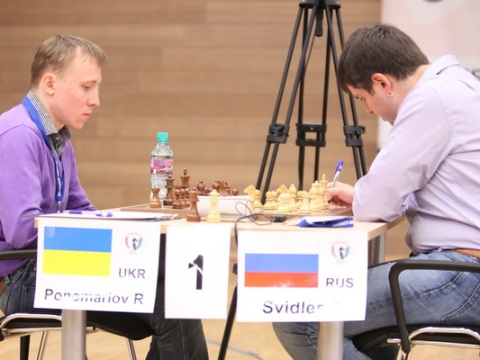 After two symmetrical centre blows in a row 14…d5 15.d4 the position was inevitably becoming easier to defend. The floor is given to Ruslan Ponomariov: “After Svidler exchanged on f4 by move 20, he did not have even the two Bishops advantage and the position became almost symmetrical and absolutely equal. There was no interest to play further; that is why White offered a draw.” 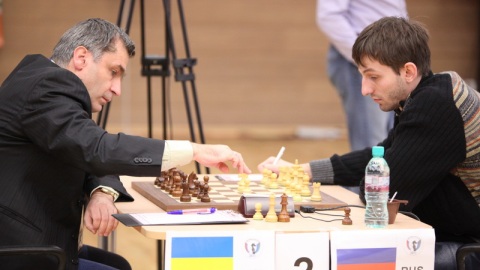 Alexander Grischuk: “The position reminded me of my game against Morozevich which we played in one of the Russian Team Championships in Dagomys. I also had an advantage during that game. The same way I missed it unskillfully after some moves and offered a draw. I would also like to say that the atmosphere in the playing hall is like in one of the childish funny stories about two flies who were in the gym: “It seems to be cold!, – says one. The second replies: “Don’t worry, we both breathe and warm it up”. There are only four participants left and it is a bit cold in the Hall.

On Tuesday 13th September there will the return games of the Semifinals. The Ukrainian Grandmasters Vassily Ivanchuk and Ruslan Ponomariov will play White. 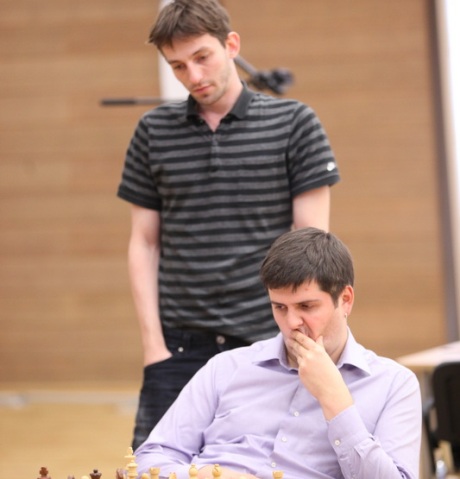 Grischuk observing the play of his compatriot Svidler