The fourth round ended up unpredictably balanced despite the fact that the fight lasted until the end on all boards. Four out of five matches had finished drawn and the outcome of the last match Ukraine – Turkey seemed equal as well.

Anna Ushenina won against Betul Yildiz, two other games finished in a draw, but Inna Gaponenko was still fighting for a draw against Selen Sop. It seems that after more than 100 moves and 6 hours of playing, the talented Turkish player simply did not have the physical strength to win the position with a huge advantage. As a result, Gaponenko made a draw and Ukraine won the match +1. 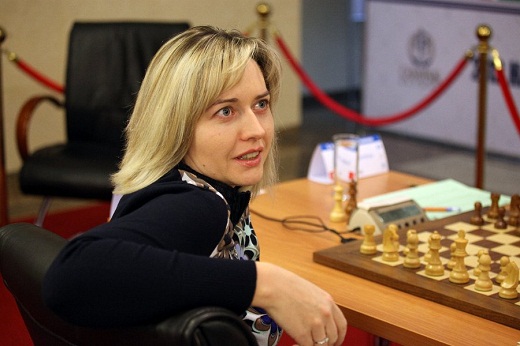 There was a very tense struggle in the key match between the leaders China and Russia – all four games were decided. Valentina Gunina won a fight against Ju Wenjun which is worth a look and Alexandra Kosteniuk defeated Huang Qian. In an equal position Natalia Pogonina went for a forced line and ended up in a lost position. Alisa Galliamova missed the nice tactical blow 16.Bd5, then her opponent Qi Gou played precisely and did not leave any chance to her opponent. .

The Indian girls showed today that despite the absence of Humpy, Harika and Sachdev, they can fight with the favorites. Eesha Karavade defeted Nana Dzagnidze, who normally is very stable , but lost the second game in this event. The Georgians immediately equalized the score due to victory of Bela Khotenashvili on the second board. On the fourth board, Nino Khurtsidze had an absolutely winning position, but failed to find the direct win a few times. The victory of Georgia was very close, but it all finished in a draw. 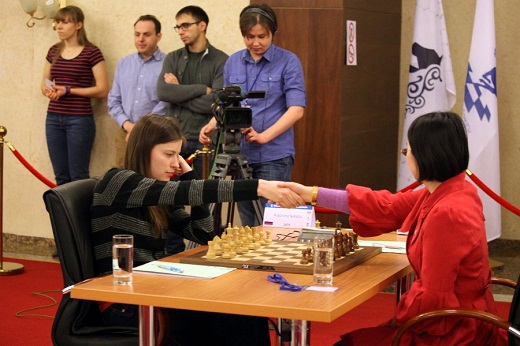 Romania – Kazakhstan finished peacefully as well. Irina Bulmaga got a quite comfortable position in the middle game and managed to outplay Gulmira Dauletova. The two other games finished in draws, but Guliskhan Nakhbaeva showed self-possession and steel nerves once again – this time in the game against the very experienced Romanian player Cristina Adela Foisor. She outplayed her opponent in a long fight and saved the match for her team.

The French team managed to make a draw in the match against the USA and finally gained the so-awaited first team point.

After the fourth round, Ukraine caught Russia and China and shares the first place. Georgia is two points behind. 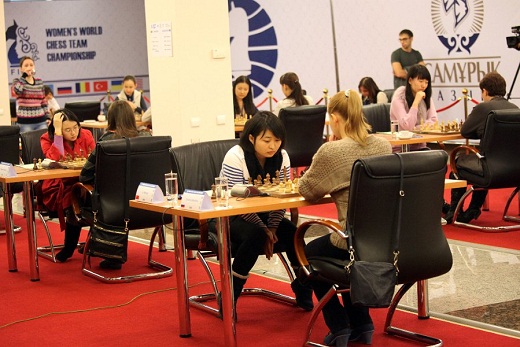 The 4th round is in progress