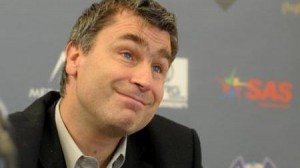 Ukraine is dominating the World Chess Team Championship in Antalya, Turkey. After four rounds Ivanchuk, Moiseenko, Korobov, Kryvoruchko, and Areshchenko have 8,0/8 match points, having defeated USA, China, Azerbaijan, and Germany.
The mighty Ivanchuk on board 1 collected 3,0/4 – a draw with Nakamura (replay game), a victory with black vs Li Chao (replay game), a draw with Rauf Mamedov (replay here), and a victory with black vs Igor Khenkin (replay here). Anton Korobov on board 2 is with 3,5/4, Moiseenko is with 2,0/3, Kryvoruchko is with 1,5/3, and Areshchenko is with 1,0/2.

Ukraine with 8 match points is 3 MP ahead of Armenia and Russia. 4th-8th position is shared by USA, Azerbaijan, Netherlands, China, and Germany with 4 MP. Turkey is 9th with 2 MP, while the last position is for Egypt with 0 MP.
Here is a round report by the well updated official website.

Today the weather in Antalya was crystal clear and it was hard not to be happy at the seaside enjoying the sunshine and the beautiful view. Unfortunately the players had to play their games in the tournament hall and they deserve everything, well at least a few drinks tonight, for not getting distracted by the warm sunshine and fighting on the board for their countries. Well done guys!

Coming to the matches, the most important pairing of today was of course China-Armenia. Aronian won a superb game against Li Chao, surprised his opponent in the opening and never let him off the hook after he managed to keep the extra pawn. Machine-like precision by the most frequent and beloved guest of the press room, congratulations Levon! (replay the game with analyis here) On the fourth board Sargissian-Yu Yangyi game was mostly revolving around equality and subsequently ended in a draw. That was the end of good news for the Armenians however. On second and third boards they suffered two defeats which they for sure didn’t expect before the match. Young Chinese talent Ding Liren played an excellent King’s Indian game against Movsesian with black on the second board. The game was rich in original ideas by the Chinese grandmaster and the way he conducted little tactics deserves the highest praise. Bu Xiangzhi played very solidly with white against Akopian in an English opening which transposed to a Sicilian setup and outplayed his opponent slowly. This loss means a great deal for Armenia and of course with this very important win China can start thinking of a place at the top.
The leading team Ukraine has beaten Germany with a 3-1 score in a very convincing fashion and thus they continue being the only team with perfect score. With the loss of Armenia today, they are also the only unbeaten team. Wounded boars present the most dangerous threats to hunters, Ukraine should keep it in mind and not relax. In today’s match their wins came from first and last boards, Ivanchuk and Kryvoruchko respectively. Kryvoruchko played an interesting game against Baramidze’s pet line, Breyer System. It’s hard to believe that Baramidze resigned after 25 moves in Breyer but he must have mixed up some moves as he ended up with a totally locked bishop and almost no breathing room for black pieces. It’s understandable that he got disgusted with his position and resigned quickly to avoid torture. As for Ivanchuk, he punished Khenkin for playing a little bit tame and won in a very clean and technical way. On the remaining two boards Ukrainian players played solid games and made draw with their opponents and thus Ukraine secured another important victory on the way to gold medal. The question whether someone will be able to stop them or not still remains open.
Another important match of the round was Russia-Azerbaijan. Russia seemed to be the heavy favourite of course, but since they haven’t had a good showing so far in this tournament, Azeris did have a reason to have high hopes about it. Indeed they put up a good fight and came close to a draw. Rauf Mamedov even enjoyed an edge and was up a pawn in a rook+bishop vs. rook+knight endgame but against Kramnik it wasn’t enough. Nidjat Mamedov-Alexander Grischuk was a non-game actually, they followed the drawn Carlsen-Anand game in Berlin Defense from the recent World Championship exactly. Guseinov came well prepared to play King’s Indian against Vitiugov and managed to draw in the end. Everything went well for Azerbaijan except the second board. Safarli played bravely against Karjakin, sacrificing pawn for attack. Karjakin however fended off the attack and won the ensuing pawn endgame up a pawn to bring a much needed victory to Mother Russia.
The other two matches were very one-sided. In the Egypt-USA match the only draw came from Egypt’s leading player GM Bassem Amin who played against the rising American star Ray Robson. The most memorable moment from other games of the match was Onischuk’s final move 44.Qe4, which was a little joke at the end. In Turkey-Netherlands match, the only draw came from the last board in which a lifeless draw was played between Erwin L’Ami and Emre Can. Van Wely has outplayed Solak very methodically and Tiviakov converted his pawn advantage in the endgame nicely against Yilmaz. Also Giri’s fine win against Ipatov must be mentioned. It was a bad day for Turkish team but the Dutch team is clearly getting back in shape with two wins in a row. Tomorrow they will play against Egypt and they have a good chance to increase their winning series to three matches, but it’s only on paper of course. Egyptian players will do their best to stop them from doing so.
Tomorrow there are very tough matches like Russia-Germany, USA-China and another classical rivalry in chess, Armenia-Azerbaijan so do not miss the games and live commentary! So far it has been full of great fighting games and you can be sure that tomorrow won’t be an exception. Stay tuned!