Ten players compete in the round robin event, forming the line-up for the strongest national Championship in the history.

Before round one the chief arbiter congratulated birthday to the defending champion Kateryna Dolzhykova. But her opponent Tatiana Kononenko was not so kind, after some creative and aggressive play she defeated the birthday-girl.

Another decisive game was played between Irina Andrenko and Anastasiya Rakhmangulova. They had a crazy affair with attacks on both kings, but Black were more resourceful and their attack concluded successfully.

The other three games were drawn, including one of the main encounters of the whole championship. Kateryna Lahno and Natalia Zhukova know each other very well but still White surprised the opponent to get a slight advantage. Later it was converted in extra pawn, but Zhukova managed to save the game in the rook endgame where she built up an unbeatable fortress. 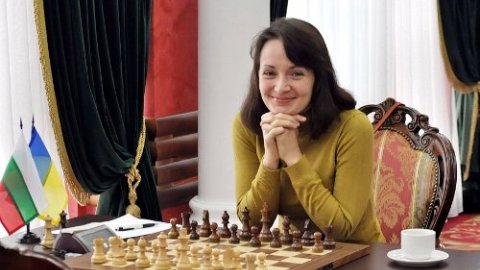 The longest game of the round was played between Oksana Gritsayeva and Inna Gaponenko – 108 moves! White kept the advantage throughout the game, but on move 67 she made a mistake that allowed Black to save the game.