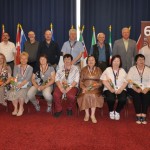 The 6th World Team Championship 50+ & 65+ took place from the 7th to the 15th of July 2018 in Radebeul near Dresden in Germany.
Venue was Radisson Blu Parkhotel, Nizzastraße 55.

In the group 65 + Open section 61 teams took part. Team Russia was too strong for the rest. Consistently, every encounter was won in attack. 18: 0 team points and 4 points lead speak a clear language.
The winner is the team of Russia with 18 matchpoints. Team players are Evgeny Sveshnikov, Yuri S Balashov, Nukhim Rashkovsky, Vladimir V. Zhelnin , Nikolai Pushkov.
Second is the team of Saint-Petersburg and third Germany 2 , both with 14 points.
The winner of Section 65 + Women is Mongolia Women.

In the group 50+ 67 teams took part. England could not use the “pole position” won the day before – against Germany 1 they narrowly missed the short straw. This Schützenhilfe used Team United States and crowned itself with a win against Canada to the world champion and relegated England to second place
The winner is the team of USA with 16 matchpoints. Team players are Alexander Shabalov, Joel Benjamin, Jaan Ehlvest ,Alex Yermolinsky , Sergey Kudrin.
Second is the team of England 1 and third Lasker Chess Foundation GK, both with 15 points.