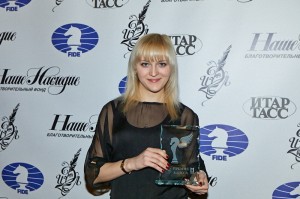 Women's World Champion Anna Ushenina is heading towards another title, this time the WWTC with Ukraine

After a shaky start, the team of USA surprised all chess fans and dramatically turned the course of the World Women Team Chess Championship by defeating the team of Russia.Valentina Gunina did her work by holding Anna Zatonskih to a draw at the start of the match. However, right around the time control Viktorija Ni and Irina Krush managed to take advantage against Olga Girya and Alexandra Kosteniuk and just a few moves later finished with decisive score. The victory by Natalija Pogonina reduced the score, when the match was already decided.
This turn of events was cleverly used by Ukraine, who defeated the top seeded team of Georgia in their direct match and increased the lead they had from yesterday to 2 match points. The victory of Ukraine was convincing, as World Champion Anna Ushenina and Mariya Muzychuk scored full points, while Natalia Zhukova and Kateryna Lahno drew their games with black.

China also benefited from the loses of Russia and Georgia. They defeated the hosts from Kazakhstan to jump into second place 2 points behind the leaders of Ukraine.  With just two rounds remaining Ukraine  have two heavy matches until the end – against USA and Russia. China’s program is easier, matches against Turkey and India, but the championship has shown so far that anything is possible.