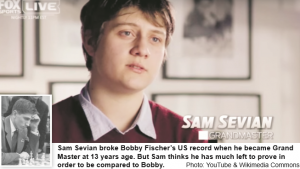 Sam Sevian, 14 years old, has agreed to play in 45th Rilton Cup Chess Festival in Stockholm, Sweden December 27–January 5. USA:s youngest GM has a clear goal in the tournament – to play for the top spots.

Chess legend Bobby Fischer still fascinates people all over the world. Bobby’s victory against Boris Spassky in 1972 is once again the focus of the day. The movie ”Pawn Sacrifice” starring Tobey Maguire has its premiere in Sweden this weekend. Sam who is 14 years old today and turn 15 the day before Rilton Cup normally deflects the question whenever the comparison is made. ”There is much left to prove to make that comparison. To quickly reach new milestones is one thing, but to be a world player and champions is quite another.” And who is Sam Sevians favorite player? ”There is no doubt Kasparov!” The former world champion Garry Kasparov is one of strong champions who helps Sam Sevian. Sam Sevian that have a rating of 2556 travels to Sweden with his father Armen.

Have you two been in Stockholm before?
– No, we haven’t, and are really looking forward to see and enjoy the city.

What can you say about Rilton Cup as a chess tournament?
– Rilton Cup is the Prime event at this time of the year, competitive and strong, always has impressive lineups of strong players. Plus, it’s in Stockholm.

Was the victory vs Wesley So in US chess championships the best game so far?
– It was probably the most valuable win in an all-out intense tactical fight, but there were more interesting games.

What is the goal in Rilton Cup?
– To play for the top spots.

What is the main goal in the chess career?
– Anyone in this trade wants to be a World Champ!