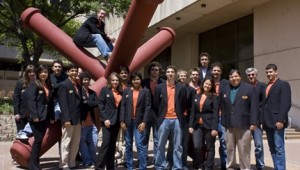 The UT Dallas chess team is gearing up for one of the season’s biggest tournaments: The Pan-American Intercollegiate Team Chess Championship, known as “The World Series of Chess.”

The tournament is taking place on 27-30 December at Princeton University. Since 2000, the chess team has won the championship or tied for first nine times. Last year, the team went undefeated to claim the top spot for a second-straight year.

“In the 66-year history of the tournament, only the University of Toronto was able to win three consecutive years outright. This was in the early ’80s. Today, collegiate chess is much more competitive.” said Jim Stallings, the chess program director.

The UT Dallas chess team took first place in both the individual and team competition during the recent 16th annual Texas Collegiate Team Championship in Houston.

The win at Houston comes after UT Dallas suffered a loss to The University of Belgrade in the annual Gligoric Transatlantic Cup, an online tournament played against a Serbian University team.