The 6th Arad Open is taking place in the Great Concert Hall of the Arad City Cultural Palace between 31st July and 9th August, 2013.

No less than 242 players are registered in the Open section. Eight GMs and nineteen IMs make this a very strong open. Sixteen different nationalities are represented, with Hungary being the most frequent, after Romania, of course.

Ukrainian GM Vadim Shishkin is leading the event after six rounds, he is the only player that arrived to a 5.5/6 score. Ten players are half a point behind him on 5/6.

The Festival is organized by the Sah Club Vados and tournament director is IO Alin Campeanu. The total prize fund is 8000 EUR. 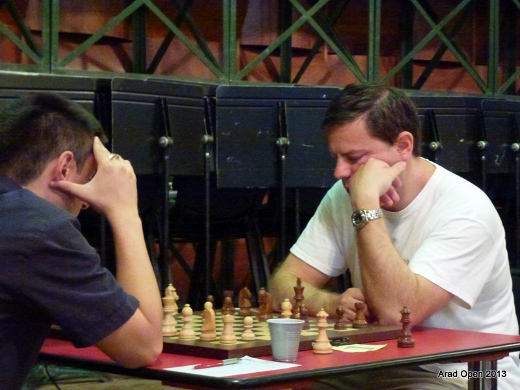 Vadim Shishkin during his fifth round game