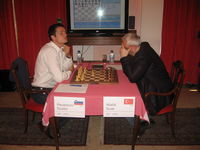 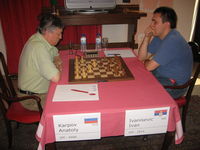 Here we are again with the frequent updates provided by Goran. Expect news from the playing hall, photos, and interesting details of the games.
Yesterday we had an exciting day with strong games. The game of day 2 was Stojanovic – Georgiev, commented by IM Kalin Karakehayov. We will see what day 3 is going to bring us.

Exciting day awaits us in Valjevo. The current leader GM Suat Atalik will face GM Karpov. The ex world champion will have the black figures after two disappointing draws. The game is very important for Atalik as well. A win will give him stable advantage only three rounds after the start of Gorenje 2007.
The local hero and Chessdom contributor, IM Mihajlo Stojanovic, will face GM Iordachescu. Stojanovic shared, that he expects to have difficulties in this game, but he will try to go for the win. Iordachescu surely will do the same since yesterday he had opening problems that ruined his game.

Earlier this morning Goran had and interview with GM Kiril Georgiev. The interview with the Bulgarian GM, as well as the interview from yesterday with GM Suat Atalik, will be posted on chessdom.com tomorrow. GM Georgiev will for sure go for the victory against GM Pavasovic. It will not be an easy task since Pavasovic showed his strong defence skills against GM Atalik yesterday.
GM Ivanisevic will have to prove his ambition to win the tournament. Currently he is on place 1-3 together with Atalik and Roiz. GM Roiz will probably have a more difficult task today since he has black against Damljanovic. It all starts in 30 minutes, at 16:00 CET.

Very nice weather today in Valjevo, the temperature is more than 25 degrees Celsius. The sky is clear and the conditions are perfect for GM Roiz favorite walks in the garden. Games start in 15 minutes, soon the live retransmission will be available. Special thanks to the main sponsor of the tournament Gorenje corporation, Belgrade.

The games are still in their opening phase. As an anecdote, no matter if GM Roiz plays with white or black his games are moving really slowly. Roiz and Damljanovic are at move 4, while in the other games 3 times as many moves have been made.

It is a pleasure to see Karpov playing Queen’s indian. It is historically his second most played opening with black. At the same time Georgiev and Pavasovic are moving at blazing speed through the Catalan.

GM Iordachescu seems to have a positional advantage against IM Stojanovic. However, Mihajlo showed yesterday that he is a fighter in even more difficult situations. Just in case, the organizers have taken one of the big screens out in order to reduce the noise. When Stojanovic won against Georgiev, the celebrations in the playing hall were disturbing for Nokolic and Damljanovic.

Very balanced games today at Valjevo. Only GM Iordachescu has spacial advantage, but any outcome is possible. That is normal since all the players are between 2668 and 2567 ELO (only 100 points difference between the weakest and the strongest player!). Expect the detailed comments of the game of the day and light notes for the others later tonight.

Goran has just talked to the organizers of the tournament and there are some interesting details. A month and half ago, when the tournament was in it’s initial organizational phase, Viktor Kortchnoi has contacted the Valjevo staff and expressed his desire to play. However, the contracts with the players have already been signed and the inclusion of one more player was connected with difficult changes.
At the same time games are entering in the decisive stages. Follow them live here.

A draw has just been agreed between Atalik and Karpov. This is the third draw in a row for the ex world champion, while Atalik will keep his position in the top of the table.

Two more games finished in a draw. Iordachescu – Stojanovic and Damljanovic – Roiz have agreed to share the point after 23 and 21 moves respectively. Thus, before the end of all the games Atalik and Roiz have both 2.0/3 and are top of the table.

All games are finished now. Finally Georgiev and Pavasovic made a draw. Strange psychological war between the two players. They played in a drawn position for 20 moves.