Roiz and Atalik win in round 7 to take the lead with 5.0 points. Updates and light commentary

Hello and welcome to the live games and updates from Valjevo 2007 featuring Karpov, Georgiev, Nikolic, Atalik, Stojanovic, Ivanisevic, Iordachescu, Roiz, and Pavasovic. Scroll down to find the games and the updates posted every 15 minutes. The live action starts at 16:00 CET.

Chessdom has scheduled interviews with a number of prominent chess figures. For now, check out the interviews with Lodi 2007 winner GM Jan Werle and Gorenje 2007 participant GM Michael Roiz. We also have great insights by David Glickman and Peter Doggers. More to come…

Game Michael Roiz-Anatoly Karpov might knock one of the leaders down. The starting moves are shaping Nimzo-Indian defence, the same line Karpov played with White in Round 4 against Georgiev 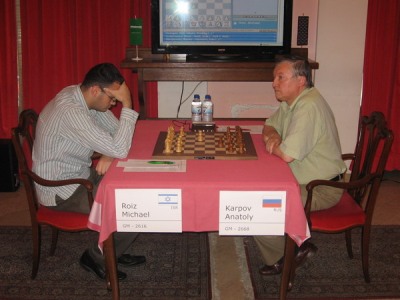 Mihajlo Stojanovic and Dusko Pavasovic have started with the line similar to Karpov-Ivanisevic from the 2nd round. Opening transposed to Advanced Tarrasch defence. This is not the first time Pavasovic deviated from his favorite Semi-Slav, he already has one win against Domen Krumpacnik in this system

More common move order in Roiz-Karpov is 10…Nd2 11. Bd2 Qc5 and almost all games finished in a draw. The two can still transpose into this line. If Karpov feels like playing for a win, he might try 10…Qc5 11. Rc1 (Nf3) Nd2 and perhaps d4

Damljanovic-Ivanisevic has started. The Queens already went off, and we predict quick draw between the team-mates

Perhaps better solution for Georgiev was 13. bc6 bc6 and then Ba3 or Bd2. Now Nikolic can open c-file for himself by 13…cb5 with Qd7, Rfc8 to follow, creating some pressure against c4 pawn 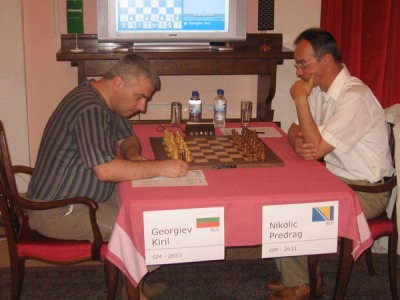 Atalik is famous over his poisonous opening preparation. His Marshall hybrid with Rb8 got a perfect sense after he played b4 to open b-file. Atalik knows that Iordachescu is “bleeding” after two consecutive losses, he wants to take the advantage of the situation and extend his lead. 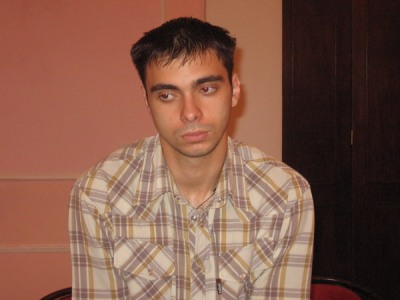 Suat Atalik is holding slight development advantage with Black against Viorel Iordachescu. 19…Qd1 and Nb4 is the most probably continuation.

Kiril Georgiev rightfully decided to sacrifice with 20. Nde4 obtaining a huge advantage against Nikolic. 22. Bc5! and 24. Ne3! were particularly strong. Inferior was immediate 24. b8-Q Nb8 25. Bb8 Bc4 and Black gets some activity. There is no need to hurry with the promotion, Black pieces will be constantly tied for b8. Now 27. Bb6 and 28. c5 should call the curtains.

Michael Roiz obtained his favorite pair of Bishops against Anatoly Karpov. This is the fifth game out of seven rounds that Roiz is operating with two Bishops.

Nikolic is trying to setup a blockade against Georgiev’s passers on the queenside, but soon 5 pawns will prove to be too much for one piece only. Georgiev can also advance his kingside majority and create passed pawn on other side, stretching Nikolic’s pieces to the point of wreck.

Atalik is about to win another pawn against Iordachescu. With two pawns down, White’s only hope are combined activity of the Rook and Bishop. But is seems like Atalik has firm control on the game. 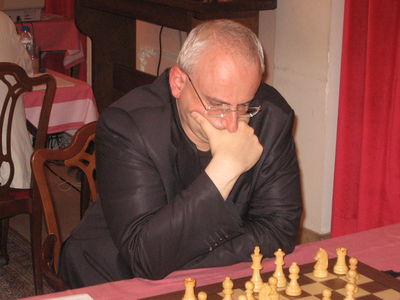 Suat Atalik beat Viorel Iordachescu to grab the leading spot after the 7th round! He can be caught only by Karpov or Roiz, in case their game doesn’t end with a draw.

Georgiev wasted some of the advantage by maneuvering his Knight too much. He still is better, though.

Michael Roiz won a piece against Karpov and now has decisive advantage! 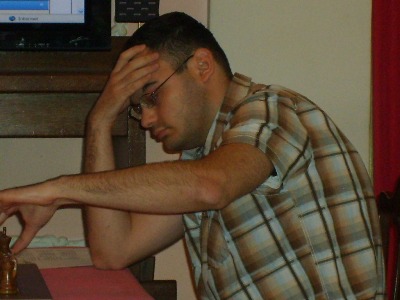 Karpov resigned on move 44! Congratulations to young Israeli Michael Roiz who is now leading together with Suat Atalik! Make sure to read the interview with Michael Roiz.

Kiril Georgiev won the endgame against Predrag Nikolic. Thank you everyone for following, make sure to be here tomorrow at 10:00 EST/16:00 CET for the 8th round?