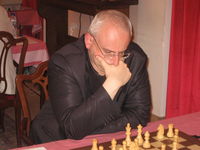 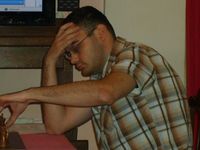 Hello and welcome to the live games and updates from the last round of Gorenje 2007. It’s been a wonderful tournament and we hope it grows into traditional. Once again, thanks to the people who made it happen. Scroll down to find the games and the updates posted every 15 minutes. The live action starts at 10:00 EST/16:00 CET.

Chessdom has scheduled interviews with a number of prominent chess figures. For now, check out the interviews with Silvio Danailov, young Dutch star and Lodi 2007 winner GM Jan Werle, and Gorenje 2007 participant GM Michael Roiz. We also have great insights by David Glickman. More to come…

The last round has started! Michael Roiz and Suat Atalik have open with Zaitsev variation in Ruy Lopez and drew after 14 moves. This leaves them tied on the first place in the final crosstable. Roiz is first on the better tiebreak! Congratulations to both players for the fantastic tournament! 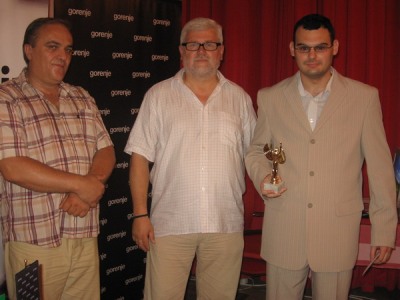 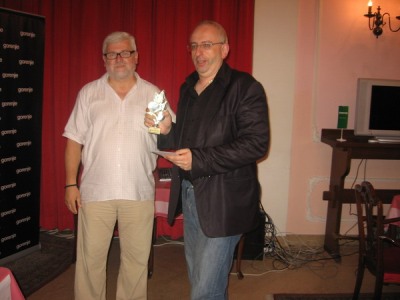 Suat Atalik with his trophy

Another Zaitsev Ruy Lopez can be seen in Iordachescu-Nikolic. White opted for modest-looking but poisonous 12. a3.

Stojanovic-Ivanisevic is Nimzo-Indian defence, Huebner variation. White will have pair of Bishops, but Black’s pawn structure is very flexible.

For the first time in this tournament, Anatoly Karpov is playing Caro-Kan, against Pavasovic. The players have repeated the line from Pavasovic-Iordachescu and drew after 10 moves. 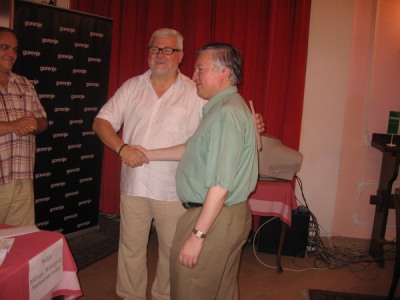 Stojanovic-Ivanisevic draw after 8 moves. The team colleagues decided not to fight against eachother. This gives final standings on the top: 1-2. Atalik and Roiz with 6.5; 3. Karpov 5.5; 4. Ivanisevic 5.0, but Damljanovic and Nikolic might catch him if they win.

Georgiev is opening with offbeat, but resistant a6-b5 against Damljanovic’s English setup.

Nikolic performed 17…Ne4 sacrifice, typical for Zaitsev and some other lines. Iodrachescu understands the danger and gives an exchange back. This will be lively, dynamic game.

Nikolic is preparing f5 and advance of his pawns. Iodrachescu will have to activate his minor pieces as soon as possible.

Damljanovic has advantage against Georgiev – more space and bad Bb7. Iordachescu is trying to slow f5 down.

Nikolic decided to recapture with his Knight on f5. This reduces pawn storm potential, but his Queen can activate via h4. Iordachescu is quickly shifting his pieces to the kingside.

After 15. f5 or 15. Bb2 Damljanovic has firm advantage against Georgiev.

Damljanovic caused another weakening move by Georgiev – h5. He will now exchange dark-squared Bishops, possibly continue with Bh3-d7 and create strong pressure along the f-file.

Damljanovic preparing 22. Nd3 and 23. Bh3 to increase the pressure on Black pawns. Rook will be forced to c8 and Georgiev won’t be able to activate his Bishop for a certain period. Doubling Rooks on f-file is next on agenda.

Damljanovic wouldn’t allow activation of Black Bishop and gave up on Bh3. Instead, he took g4 away from Black pieces and is preparing Rf2-Rcf1. Queen will come to e3 to press on c5 and threat Qg5.

Iordachescu-Nikolic is intense battle on the kingside. Nikolic can continue with Rad8 and Qe7 (or Qg6, h5). After Georgiev moved Bishop to c8, Damljanovic might consider opening another front with a3.

Damljanovic advanced h4 and g4 opening the files around Black King while Georgiev’s pieces are tied for c5 defence. If 31…Ndf6, 32. Be2! is strong and Knight has to go back to d7.

Iordachescu engaged in dangerous adventure by sacrificing Knight on g5. Nikolic avoided the trap 32…Kh8 33. Rc7! and Qh5, and started a counterattack with 33…f3.

Nikolic finished Iordachescu with a brutal attack. This results lifts him up to 4th place tie.

In the fantastic twist in the time scrabble, Kiril Georgiev turns the table to win against Branko Damljanovic!.

Thank you everyone for following the Gorenje 2007 tournament! Stay tuned for more chess news coverage on Chessdom.com. 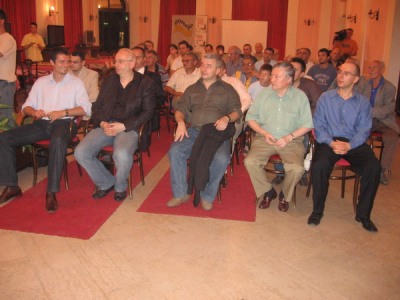 Players at the closing ceremony 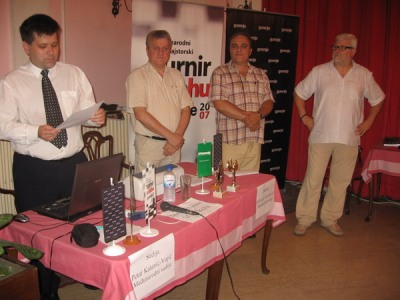