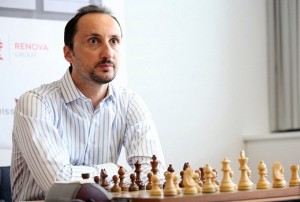 Veselin Topalov, the FIDE World Champion from San Luis 2005, published an open letter of support for Silvio Danailov. It comes at a moment when the chess life in Bulgaria is close to revolution and Danailov’s position as Bulgarian Chess Federation president is endangered by allegations of misuse of over 2,5 million eur, elections corruption, and other internal irregularities.

History of the BCF scandals so far

The federation responds to criticism with bans

Local pressure against BCF and Danailov mounts, boycott and clubs with open letters

Open letter by Veselin Topalov in support of Danailov

With great amusement I am following the aggressive smearing campaign against BCF and its leadership, lead by Stefan Sergiev, Kiril Georgiev, Ventsislav Inkiov, and Metodi Stoinev. That is why I would like to share some facts.

From the published documents it is clear that Stefan Sergiev was secret agent for DS (e.d. the national security agency during communism), which absolves him from the moral right to speak about principles. In my opinion, among those people, who have worked or reported for DS, there are really talented and well prepared personnel, but Stefan Sergiev is not such. Besides, as far as my understanding is, the trend in Bulgaria is not to admit people like him at leadership positions.

Recently, with great indignation I learned that via the company of his son Stefan Sergiev has sold the chairs on which we sat with Anand during the match. for the World Championship in Sofia in 2010. While in Argentina they still keep the tables and the chairs from historical events played there like the matches for the World titles Alekhine – Capablanca in 1927, Fischer – Petrosian in 1972, and the table and chair where I played when I became World Champion in Saint Louis in 2005, all of them as historical and cultural artifacts, those [e.d. from Sofia] artifacts have sunk deep into the pocket of the pretender “historian” of Bulgarian chess Stefan Sergiev.

You know, since my manager Silvio Danailov became President of BCF (2010 until today), I have played two European Team Championships and two Olympiads for free, so that such people as Stefan Sergiev to receive large amounts of money for the same period for writing books that no one buys.

I would like to ask Stefan Sergiev and the other “gentlemen” – how much according to them should I receive for my gold medals from the European Championships in Warsaw in 2013 and the Olympiad in Tromso in 2014 if Stefan Sergiev has received over 50 000 eur? Don’t they think that if Silvio Danailov wanted money it was in his right to award me with large amounts and then take his percentage?

I would like to ask Kiril Georgiev, Ventsislav Inkiov, and Metodi Stoinev don’t they think that the Candidates Tournament in Khanty Mansiysk in 2014 is important for BCF, so that they designate money for my preparation? Didn’t Silvio Danailov save tens of thousands of eur to BCF, so that other activities take place, for which otherwise there was no money?

I would also like to ask Kiril Georgiev why does he think that BCF should always help consumers as himself, who are ready at any moment to go play for another country, as he did with Macedonia, and then to come back to play for Bulgaria when the offer is good enough? Isn’t it better for BCF to search and invest in young talent, rather than fulfill the conditions of a player who has shown 4 outrageous results at his last 4 participantions for the national team? Isn’t it a better priority for BCF chess to be in schools, to partner with the European Parliament and UNESCO, something that 4 years ago BCF was only dreaming of? I personally believe it is better to invest in the future, rather than in players who have already received a lot.

To all supporting the smearing campaign of the above mentioned people, clearly serving the interest of a third party, I would like to say that their only goal is to destroy and will never build something positive for BCF and Bulgaria.

Note: original letter is in Bulgarian and the translation by Chessdom.com, keeping the original words of Veselin Topalov as close as possible to the actual writeup.