International Master Vidit Santosh Gujarathi became the 30th Grandmaster of India after drawing his game with Grandmaster Viorel Iordachescu of Moldova in the ninth round of Rose Valley Open International Chess tournament here at Gorky Sadan.

Round 9 video by Vijay Kumar

Vidit Gujarathi made another GM norm and attested himself as India’s 30th Grandmaster after this round. The norm was probably not needed and Vidit’s application would have come under consideration but after this performance the Nasik based youngster is set to enter the elite Grandmasters club. 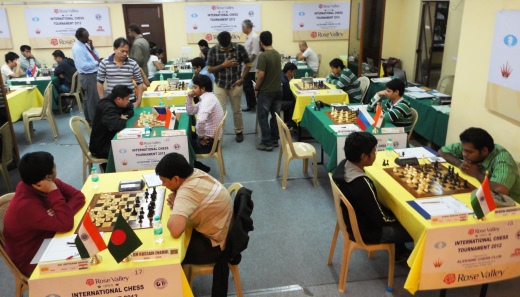 With the spate of draws continuing at the top boards, Grandmaster Ni Hua of China, and Anton Korobov of Ukraine benefited and emerged as joint leaders on 6.5 points.

With just two rounds to go in one of the strongest Asian events, it’s a seven-way lead with Indians Vidit Gujarathi, Deep Sengupta, S P Sethuraman, Vishnu Prasanna, Viorel Iordachescu of Moldova, Korobov and Ni Hua all having the same score.

It turned out to be a day for norms galore at the Russian center with a total of eight norms scored thus far. Apart from the three Grandmaster norms, as many as five International Masters norms were scored in the day. Alekhine Chess Club’s Diptayan Ghosh topped the list of IM-norm makers after he drew with highest rated Indian in the fray – Abhijeet Gupta.

At the top of the tables Vidit did not have to struggle hard for his draw and the point was shared by him and Iordachescu quite easily. Vishnu Prasanna was lucky in beating Ahmed Adly after the latter blundered from what seemed like a favourable middle game.

Dhopade needed just a draw and from a dead drawn endgame arising out of a queen pawn opening, disaster struck Lintchevsky as he lost track of the position. Dhopade gladly accepted the chances that gave him an extra half point and took him to six points in all.