Vidit Santosh Gujrathi is one of the leading Indian Grandmasters, a member of the national open team at the Asian Nations Cup 2016. Vidit has once won the World Youth Champion U-14. Also, he got the bronze medal in the World Junior Chess Championship. He has outplayed his opponent from China at Round 5 and came to share the impressions on his performance at the tournament.

ACF Media: What other best achievements of yours in chess I forgot to mention?

Vidit: Among closed competitions, I once won Lake Sevan closed chess tournament with average rating of 2640. It was quite a decent tournament which I also count as one of my best achievements. 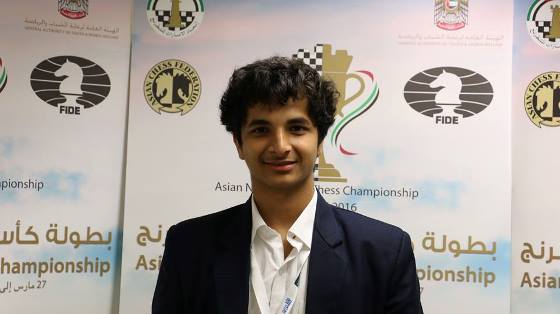 ACF Media: This year there will be the World Chess Olympiad in Baku. Are you playing there?

ACF Media: Do you consider the Asian Nations Cup as kind of preparations for the coming Olympiad?

Vidit: I always love to play in team tournaments. Somehow it is different competition from individual games. So, I am enjoying the tournament so far. It is going well for me and for my team. But I don’t see it as preparations, it is just one more important chess event for me personally.

ACF Media: How is it going on so far for your team?

Vidit: My team unexpectedly drew against Mongolian team in the second round. It was a bit surprising for us. But the Mongolian chess players increased their level lately and they were very strong when playing against us. I was also playing in that round and I saw the games. I think we are actually lucky to have made a draw. Then we won against team from Kazakhstan.

The most important match is today: we play against top seed of the tournament – Chinese team. I think if not take into account our result in the second round, we are doing quite decently.

ACF Media: Let’s speak a bit about today’s game. You outplayed a Chinese Grandmaster Wei Yi with black. Was it a tough game?

Vidit: Chinese players are really strong. For some reasons this is only my second win against a Chinese player. I have drawn or lost all previous games against them. I am very happy to win this game.

It was an Italian game which, I think, he did not expect. Generally I play Sicilian defence. This was a good choice, to my mind. My opponent was spending a lot of time for thinking. I had a lot of extra time. So, I have a big advantage and slowly he has made some positional mistakes. I managed to take over. After that it was quite easy to win.

ACF Media: I guess your team’s plan for this tournament is to win?

Vidit: Yah, if we win this match against China, we are the favorites to win the Cup. We meet with Vietnamese chess players in one of the next rounds. I am pretty sure if we manage to win against them – we are most likely to win the tournament.

ACF Media: I wish you good luck in the tournament. Thank you so much for coming, Vidit.