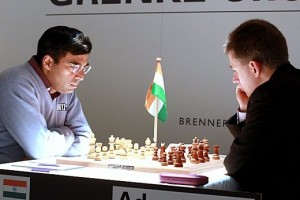 The oldest players of the Grenke Classic, Viswanathan Anand (43) and Michael Adams (41), drew their 6th round game right after the time control.

The Indian chose the “Spanish Torture” with 6.d3 to look for a way to outplay his experienced opponent. However, the Englishman was well prepared for this possibility and demonstrated with his quick play that he was ready to stop any offensive attempt. After the queens were exchanged on move 34, it was pretty clear that the game would end in a draw.

Meanwhile, the other two battles have heated up a lot. Fridman seemed to have a solid positional edge over Naiditsch, but the latter proved once again that he’s not afraid to go into complications and turned the tables with an exchange sacrifice. The time trouble frenzy is going on right now.

The leader Fabiano Caruana seems to be in trouble against Georg Meier, who has an important space advantage and the chance to get a winning position, but this won’t be easy to do with so little time on the clock; he has 3 minutes for the last 11 moves.