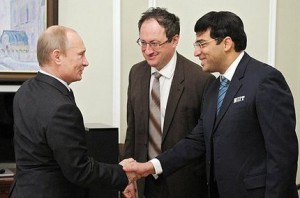 The awards were presented for the recipients’ great contribution to expanding friendship and cooperation with the Russian Federation and to the development of economic, scientific and cultural ties.

The FIDE World Championship Match between Viswanathan Anand and Boris Gelfand took place in 2012 at the State Tretyakov Gallery in Moscow.

After the match, President Putin met with both chess players and congratulated them on brilliant results and great match that provided enjoyment for chess fans around the world.

The Russian Chess Federation congratulates Anand and Gelfand on the prestigious Awards.