The 11th edition of the International tournament dedicated to the memory of the 8th world chess champion Mikhail Tal was held in the Museum of the Russian Impressionism and in the Central Chess Club in Moscow on March 1-5. The super tournament was divided in two parts: rapid and blitz.

Viswanathan Anand won the rapid part of the super tournament with 6 points out of 9. Shakhriyar Mamedyarov, Sergey Karjakin, and Hikaru Nakamura are half a point behind. Thanks to the superior tie-break, Mamedyarov took the second place, while Karjakin is the third. 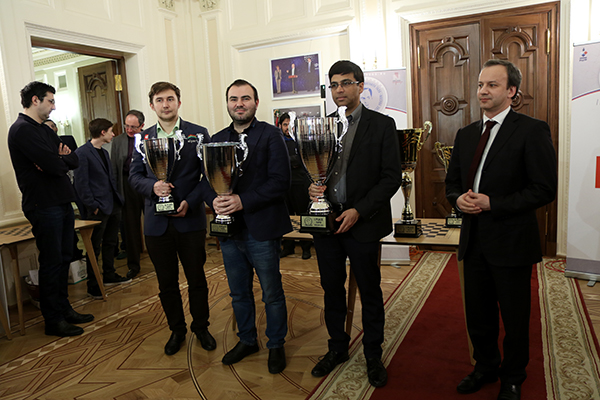 Viswanathan Anand: “It was a pleasure to play in the Museum of the Russian Impressionism. Chess lovers had an opportunity to watch us playing from outside. Museum is a spectacular venue, it is nice to look out and see a portrait, a landscape, and other artistic works around you, when you are thinking about chess. This idea that the Russian Chess Federation has been implementing for a while already is just great. By the way, the programme Chess in Museum started with my match with Boris Gelfand in the Tretyakov Gallery in 2012”.

Sergey Karjakin won the tournament win one round to spare. The Russian grandmaster scored 10 points out of 13. Hikaru Nakamura is second with 8.5 points. Ian Nepomniachtchi took the third place with 7.5 points. 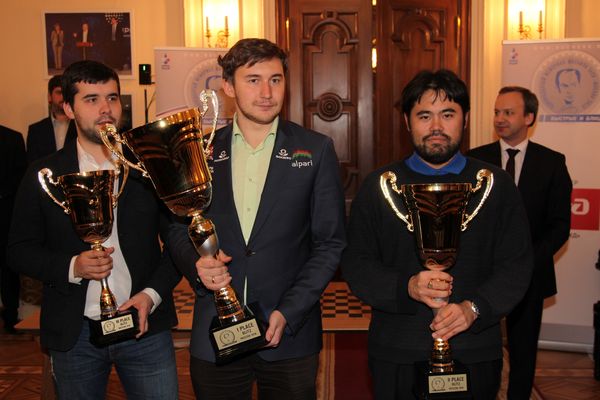 Sergey Karjakin: «Of course, I am happy with my result. In fact, I played good chess. I lost to Kramnik only, but the game happened to be a very fighting and interesting one. Vladimir was luckier in the end. But I was in a good shape and I was struggling in every game, so my rivals stopped stranding the strain at some point. But you never can tell in blitz: some days ago, I have been playing in the Cup of the Group of Companies “Region” and took the 15th place”.

Deputy Prime Minister of Russia Arkady Dvorkovich congratulated and rewarded the winners and prize-winners at the closing ceremony. He thanked the organizers, partners, and all participants of Tal Memorial and wished good luck to the participants of the forthcoming Candidates Tournament.

The super tournament was organized with support of the Avtodor Group of Companies, the Charitable Foundation of Elena and Gennady Timchenko, JSC Russian Railways, PhosAgro, Art Russe, and Building and Construction Group of Companies “Don”. 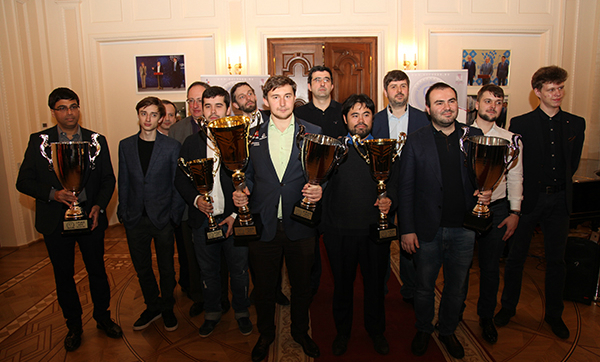