“Vishy” Anand, as he is often called, was in Los Angeles by invitation from Metropolitan Chess, Inc. by founder Ankit Gupta for a camp that the organization had put together.

The camp brought together over 100 youth attendees from all over the nation for a five day training session by internationally recognized coaches.

This was Anand’s second visit to California, previously having been invited by Metropolitan Chess, Inc. as well. He had an opportunity to interact with numerous youth players, many of whom are burgeoning stars of their own. 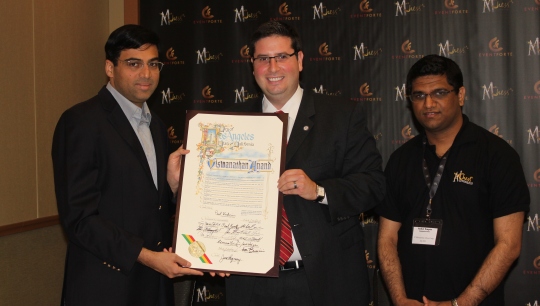 WHEREAS, VISWANATHAN ANAND is a grandmaster of chess and the current world chess champion, and

WHEREAS, VISWANATHAN ANAND has successfully defended his title against the best players in chess time and again, and,

WHEREAS, VISWANATHAN ANAND has become an ambassador for chess in his native country of India and around the world, and,

WHEREAS, VISWANATHAN ANAND has helped spread the benefits of learning and playing chess to many young Americans, and

WHEREAS, the city of Los Angeles has a growing chess community and many passionate chess players have followed VISWANATHAN ANAND’s career and success, and,

NOW, THEREFORE, BE IT RESOLVED, that by the adoption of this resolution, the city of Los Angeles, hereby congratulates VISWANATHAN ANAND on all his success and thanks him for sharing his passion with the world.

The resolution was seconded by all 15 city council members of Los Angeles.

Kassakhian also presented Anand with a key to the City of Glendale, which is just North of Los Angeles, and boasts a large Armenian population and chess heritage.

Throughout their meeting as well, Kassakhian acknowledged Anand’s upcoming title defense in November 2013 against Norwegian wunderkid and grandmaster Magnus Carlsen. This world championship match will be played in Anand’s hometown of Chennai.

“It was a true honor and pleasure to meet with Mr. Anand and wish him luck on his upcoming title defense,” expressed Kassakhian. “He is an engaging and caring individual and it was wonderful to see him take time out to work with children who aspire to play at his level one day.”