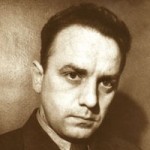 Latvian Chess Federation has the pleasure to announce the 3rd Vladimir Petrov Memorial, which will be held on 21-23 February, 2014, at the Jurmala City museum or in Jurmala house of Culture (to be decided) in Jurmala, Latvia.

The aim of the tournament is to pay the tribute to one of the brightest representatives of Latvian Chess ever who tragically died in Soviet camps during the Second World War. The tournament will be supported by the family of Vladimir Petrov among others.

The festival will feature leading Latvian Grandmasters as well as a few Grandmasters from neighboring countries and chess lovers from all around the world.

The tournament will be held in three groups A, B and C.

Tournament C is reserved for players rated less than 1875. Time control is 12 minutes plus 5 seconds per move; Swiss system; 12 rounds. The prize fund will be 75% of all entry fees.

The Blitz Tournament will be held Feb. 20 at 16:30 in the Amber Beach resort (Jaunkemeri). The time control is 4 minutes plus 3 seconds for each move starting with the first move; 9 rounds. Prize fund: 80% of entry fees. The entry fee is 10 Euros.