ST. LOUIS, April 7, 2013 – Webster University made history today when it became the first St. Louis team ever to win a Final Four collegiate chess championship. Webster’s top-ranked chess team emerged victorious in the President’s Cup – also known as the Final Four of Collegiate Chess – a two-day throw-down that determines the national champion of college chess teams. The tournament was held Saturday and today in Rockville, Md.

This is the first time in history a team made it to the Final Four of Collegiate Chess in its first year at a school and also the first time that a first-year team has been ranked as the No. 1 seed in the Final Four. Webster’s chess team has ranked No. 1 since August 2012, when the team was officially formed.

Webster will welcome the national champions back to campus during a lunch-time ceremony on its Webster Groves campus Monday.

“Congratulations to all the members of our team and all who support them, as I know that they have worked hard to prepare for this moment,” said President Beth Stroble, who was in the Washington, D.C. area this weekend to watch the Final Four. “Their competitors were smart, tough, and skilled and there were many tense moments this weekend, which makes this championship particularly significant for Webster University. I couldn’t be prouder.”

“Today was a great day for chess, for Webster and for Webster’s chess team, and for all of our students who worked hard to win this tournament,” said Provost Julian Schuster, who also accompanied the team to the Final Four competition. “We are all winners because this accomplishment came about through the hard work and dedication from the people who love chess, who love Webster, and from all our supporters in the community. We are proud of all of our students and are proud of the chess program, and we look forward to many more years of championships.” 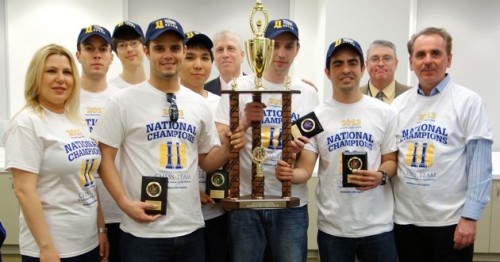 The Final Four is the most prestigious team tournament in collegiate chess; the winner is known as the national champion of college chess. To get to the Final Four, teams must first compete in the Pan American Intercollegiate Team Chess Championship, held each year during the last week of December. Only the top four teams in this event qualify for the Final Four. This year, in addition to Webster, other schools competing in the Final Four were the University of Maryland-Baltimore County, University of Texas-Dallas and University of Illinois.

In the round robin-format Final Four, each of the four school teams played in three rounds of competition, playing one full match against each of the other schools. Each game won was one point to the school, and each draw was one-half point. Game points determine the overall winner.

While Webster entered the competition in the top spot, the win was not easy. Webster swept Illinois in the first round, earning four points, and in the second round against Maryland the team drew three games and won the fourth. By the end of the day, Webster only led University of Texas by one-half point at 6.5 to 6.

In the final round on Sunday, Webster faced the Texas team. Two of the games were a draw, and Webster won the final two matches, earning 9.5 points to Texas’ 7.

“It was a nail-biter down to the final moments,” said Susan Polgar, the chess team coach. “We had a win and draw when the first two games ended in the third round, but with two more games going, there was still a chance that Texas could still defeat us. When we clinched the championship with a draw and a win on the last two boards, everyone in the room jumped to their feet in excitement.

“We are very appreciative of all the people at Webster who cheered us on, especially all the Webster alumni and employees in the D.C. area who were able to come to the championship to show us support,” she added.

During Sunday’s awards ceremony at the competition, Polgar was named the “College Chess coach of the year.” This is the third team in a row that Polgar has coached to a President’s Cup victory. Before joining Webster, Polgar was the coach for Texas Tech’s chess team, which won in 2011 and 2012.

With eight grand masters on its team, Webster sent six of them to the Final Four, including four freshmen who had never previously competed in the Final Four: Georg Meier, an international business major and a sophomore, Wesley So, a freshman finance major, Ray Robson, a freshman who is still exploring majors, Fidel Corrales Jimenez, a freshman computer science major, Anatoly Bykhovsky, a finance major and junior, and Manuel Leon Hoyos, an economics major and freshman.

Webster will host a ceremony for the winning team at 11:30 a.m. Monday, April 8 in Marletto’s, the student cafeteria located on the ground floor of Loretto Hall on the Webster Grove campus. The event is open to the campus community.

With its home campus in St. Louis, Webster University (www.webster.edu) is the only Tier 1, private, non-profit U.S.-based university providing a network of international residential campuses. Founded in 1915, Webster University’s campus network today includes metropolitan, military and corporate locations around the world, as well as traditional residential campuses in Asia, Europe and North America. The university is committed to delivering high-quality learning experiences that transform students for global citizenship and individual excellence.