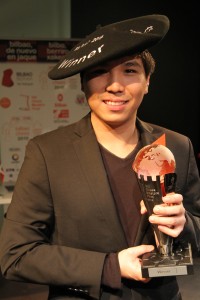 The 8th Bilbao Masters 2015 took place from October 26th to November 1st, in Bilbao, a city in Spain, the capital of the province of Biscay.

The rare score system, 3 points for a victory, 1 point for a draw and 0 points for a loss, made the tournament tense until the very last round. Wesley So and Anish Giri finished with 8 points, leaving the “tiger of Madras” and Chinese prodigy full 3 points behind.

So and Giri played a 2-game playoff to decide the title but the USA player of Filipino origin took the lead in the first encounter. He chose the Exchange Variation of Slav Defence and after 30 moves nothing was promising victory for So, since he was a clear pawn down. However, his activity was enough compensation for black extra passed pawn and the game was soon equalized. The final mistake was made by Giri who blundered a knight in a dead drawn endgame.

In a sharp second duel in Italian Game Giri didn’t manage to convert his material advantage and the draw was fixed after no less than 98 moves. Thus Wesley So was crowned new champion of Bilbao Masters 2015. 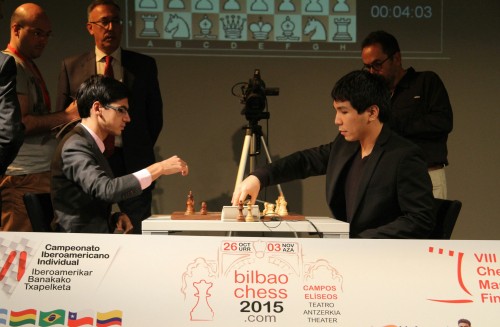 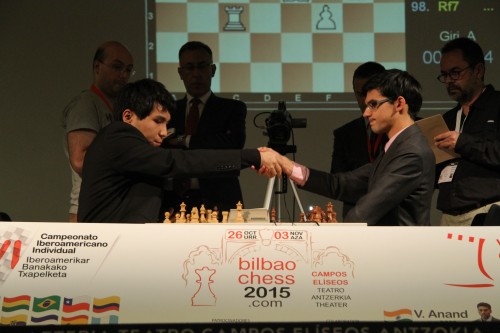 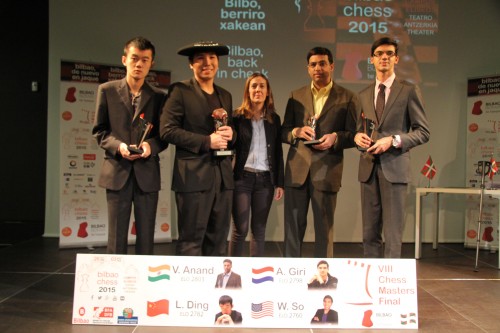 Bilbao Chess 2015: Giri overtakes So in the leading position
The American Wesley So and the Dutch Anish Giri are most certainly the two favorurites to win Bilbao Masters Final, after the tremendous victory ...

Wesley So tops Capablanca Memorial 2014
The 49th edition of the Tournament Capablanca in Memoriam 2014 took place from 7th to 18th May, 2014 at the Habana Riviera Hotel in ...

FTX Chess Cup Finals Day 2 – So against Carlsen
Wesley So stretched his incredible unbeaten run to 29 games as he set up a blockbuster FTX Crypto Cup finale against Magnus Carlsen. The two pacesetters in ...

CEZ Trophy David Navara vs. Wesley So LIVE!
The traditional ČEZ Chess Trophy 2015 Festival is held from 12-16th June, 2015 at the marvelous Michna Palace on Kampa Island, in Prague, the capital and ...