WGM Irene Kharisma Sukandar, who traveled from distant Indonesia, took a clear first place in Alexander The Great Open by concluding the event with 6,0/7 points.

Despite challenging the field with 2 GMs and 6 IMs, her result was rather convincing as she started with four consecutive wins and remained in sole lead until the end of the tournament.

Sukandar also added 25 elo points and raised her rating to 2395, only five points shy from the title of International Master. She already has six(!) IM norms. 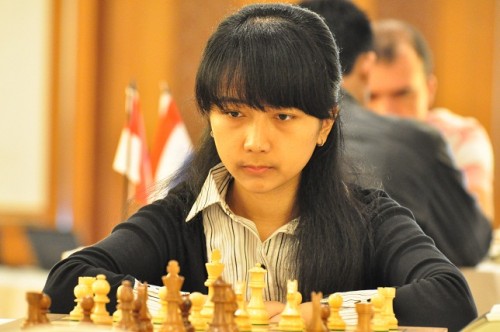 IM Mert Erdogdu had a chance to overtake Sukandar in the direct last round clash but the game was drawn and the Turkish player finished clear second with 5,5/7 points. Full standings here.

IM Boris Itkis took the trophy for the third place thanks to the superior tie-break.

Irene Kharisma Sukandar commented that she didn’t expect to win this tournament and just hoped to play a couple of good games, “I didn’t come here with the focus on the Open, I am here to accompany my sister who is playing in the World School Championship. But I did pretty well and I hope that my sister can follow in the footsteps.”

“After this tournament I will compete in six-player double round robin in Keckemet, Hungary. It will be a tough challenge as there are four Grandmaster participating. I just hope I can get another five elo points in that tournament”, (smiling).