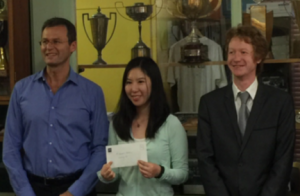 Congratulations to WGM Xiaobing Gu, winner of the Australian Women’s Masters 2016! Although first place had been decided before the last day, many of the players still had plenty to play for in round 9, with the minor placings a potential WIM norm on the line!

As it turned out, Hanna Leks; Jilin Zhang had a quick draw, but the other three games were all won by the higher rated player, which meant that the pre-round minor placings remained, with Deimante Daulyte finishing in outright second place. Ticia Gara in outright third. It also meant that no players received WIM norms from the tournament.

In the Reserves, Jody Middleton had already secured at least equal first place, but was joined by Narelle Szuveges, who managed to defeat Lillian Lu after Tanya Krstevska was unable to win her game.

Jilin Zhang played a Maroczy Bind against Hanna Leks & got a small space advantage from the opening. With little to play for in the last round, the players agreed to a draw after a few more moves.

Deimante Daulyte played an Austrian-like attack against Irina Berezina’s Pirc Defence & achieved a space advantage out of the opening. After some middlegame manoeuvring Daulyte was able to open files on the kingside & used these to create a mating attack against Berezina’s king.

Julia Ryjanova played a fianchetto system against Maria Gosciniak’s Dutch Defence & gained an early initiative. Gosciniak eventually developed her pieces & slowed Ryjanova’s play, however a few inaccurate moves in the middlegame allowed Ryjanova to win some material. Ryjanova then used her queen & knight to create strong threats against Gosciniak’s king & she was unable to find an adequate defence.