Since 2015, Belaya Ladya has welcomed teams from foreign countries. This year, more than 100 teams from 78 regions of Russia and 22 countries of the world will take part in the final event. 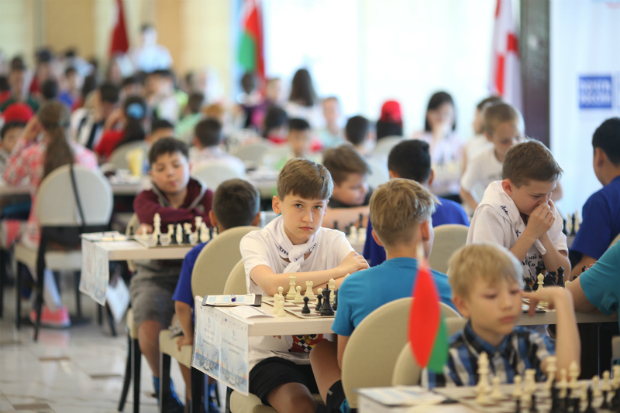 The best foreign players will be given the right to participate in the Aeroflot Open 2019. The best Russian team composed of 5 participants will be presented with a trip to France, thanks to the support of Elena and Gennady Timchenko Charitable Foundation. The team will play a match against the French schoolchildren of the same age.

Founded in 1969, the tournament Belaya Ladya expands every year. More than 50000 schoolchildren under 14 years of age participated in qualification tournaments in all regions of Russia during 2017/2018 academic year. 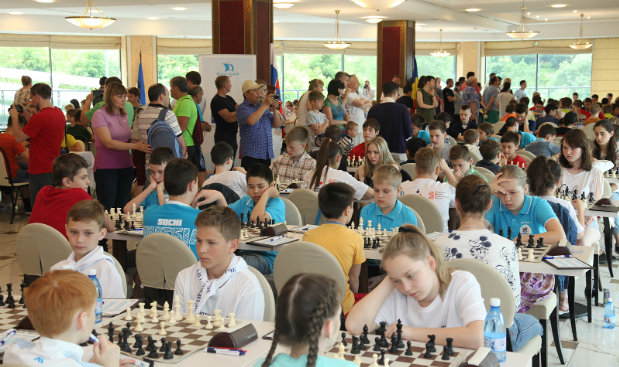 22 foreign teams, who won schoolchildren’s competitions in their countries, will take part in the final event this year. Let us note that children from 6 countries arrived in Dagomys in 2015, 9 foreign teams participated in the event in 2016, and 17 teams played in 2017.

A team from orphanages and boarding schools is participating in the final competition for the fourth year in a row. Children from the Boarding School №26 from Ryazan Oblast, who won the Ascension tournament (Sochi, 2018), will join other participants in the Belaya Ladya finals. This was made possible by RCF programme aimed at providing chess education to the children growing without parents.

On June 1, the opening ceremony of the tournament will take place in Dagomys. The participants will be entertained by a special programme and a concert of Matvey Glukhovsky (piano) and Irina Matveeva (violin).

The competition will be held according to the Swiss system in 9 rounds. The winners will be announced on June 8. 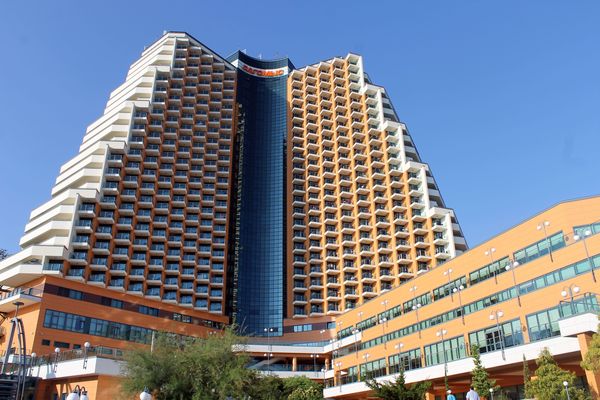 Coaches and pedagogues will be invited to take part in a roundtable discussions which will be held by the RCF Executive Director Mark Glukhovsky and other speakers.

On June 3-6, the all-Russian conference of teachers and pedagogues of additional education, who were taking an active part in the Chess Universal Education in Russia contest, will take place in Dagomys during Belaya Ladya. 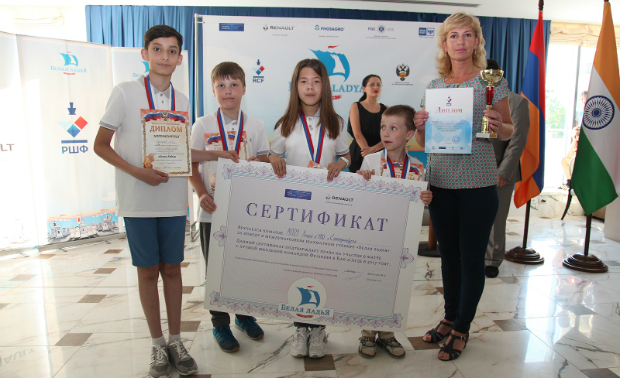 In parallel with Belaya Ladya, the final competition of Chess in Schools project, which is conducted by the Russian Chess Federation together with Elena and Gennady Timchenko Charitable Foundation, will be held. 9 teams from Kemerovo, Novosibirsk, and Pskov regions, Altai Krai, Krasnodar Krai, Zabaykalsky Krai, Chuvashia, Ingushetia, Udmurtia, and will take part in it. 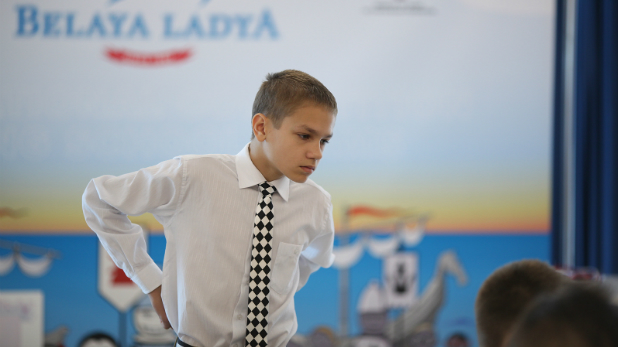 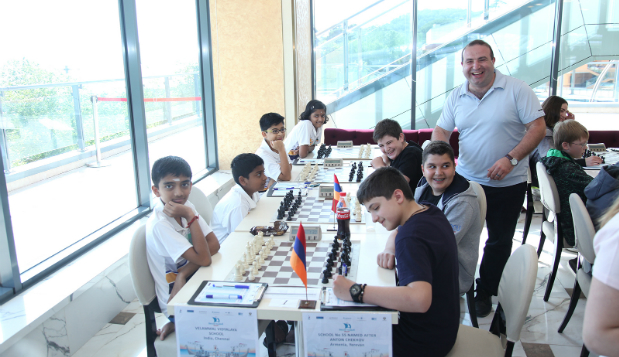 Belaya Ladya is an annual All-Russia chess tournament for teams of educational institutions. It was founded in 1969 and is organized by the Russian Chess Federation and the Ministry of Sport of the Russian Federation under the auspices of the Ministry of Education and Science. The tournament is held with the support of the Elena and Gennady Timchenko Charitable Foundation. Eligible for participation are pupils younger than 14. The tournament is held in several rounds; the best teams from the participating regions play the final games. Prior to 1991, Belaya Ladya, along with Leather Ball and Golden Puck, was tremendously popular, and millions of Soviet schoolchildren played qualifying rounds. After the disintegration of the Soviet Union, the tournament took a pause lasting longer than a decade. Belaya Ladya was revived in 2004. The mission of the tournament is to popularize chess among pupils, find talented young players and develop the creative and intellectual capacity of young people.

Elena and Gennady Timchenko Charitable Foundation is the biggest family charitable foundation in Russia. The family of Elena and Gennady Timchenko has been doing charity both in Russia and abroad for more than 25 years. In 2010, the Timchenkos founded the charitable foundation in order to achieve long-term progress in philanthropy. The Timchenko Foundation focuses on promoting active longevity, developing sports, solving the problem of the social orphanage, and development of the Russian regions by means of culture.

The Foundation supports people who are changing their lives and the World for the better.

Renault Russia company, established in 1998, is one of the leaders of Russian automotive industry and one of the major investors into the Russian automotive field (summary investments are more than 1.5 bln euros). The company’s actives include two manufacturing areas: the Moscow factory and the assembly line in Tolyatti (together with the partners of Avtovaz-Renault-Nissan Alliance). A well-developed dealer net, comprised of more than 160 points in Russia, allowes to provide our clients with a permanently high level of service. Since 1998, more than 1.7 million Renault cars have been sold. Renault Russia relies heavily on local manufacturing and produces a wide range of popular models adapted to Russian conditions and possessing good export potential.

PJSC FGC UES (Federal Grid Company of Unified Energy System) – is one of the largest electricity transmission company grid of the world. The Company’s assets include about 143.2 thousand km of transmission lines with capacity up to 1,150 kV (PTL) and 946 substations with more than 347.3 GVA. The company maintains and develops the grid system and supervises grid facilities and infrastructure in 77 Russian regions, covering a territory of 15.1 million square kilometers.

The company is a part of PAO Rosseti, the largest power holding of Russia which owns 80.13% of the company’s shares. The company includes more than 22 thousand of workers. More than 60% of the employees have a higher professional education. Chairman of the Management Board of FGC UES is Andrey Murov.

Since 2016, the company is the general sponsor of the Russian chess national teams.

PhosAgro is a traditional partner of the Russian Chess Federation. PhosAgro group is an absolute leader in the field of delivery all kinds of fertilizers in the Russian market and is one of the three largest producers of phosphate-based fertilisers in the world.

Its core line of business, including a phosphate raw materials, 39 brands of fertilizers, feed phosphates, ammonia, sodium tripoluphosphate, is used by con-sumers of 100 countries of all inhabited continents. The priority distribution areas, besides Russia and the CIS states, are Latin America countries, Europe and Asia.

PhosAgro sponsored the World Chess Championship Matches in Sochi and New York, where the Russian grandmaster Sergey Karjakin demonstrated a really exciting play. At the same time, the company continues to promote chess in its presence regions by opening chess classes in sponsored schools and kindergartens as well as financing the education and training of chess pedagogues.