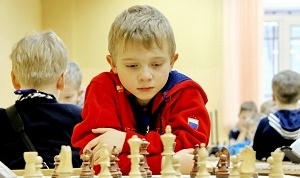 Ilya Makoveev (Gelendzhik) and Satbek Akhmetdinov (Kazakhstan) scored 8 points in the U9 Boys’ group. In the last round the Russian player outplayed the athlete from Kazakhstan, who was leading during the whole tournament. He was placed first according to additional index. Sergey Gukhman (Tver) with 7,5 points became the third.

The triumphant of the tournament of the youngest girls is Amina Kairbekova (Kazakhstan). She scored 9 points. Emilia Zavivaeva (Nizhny Novgorod) scored 1,5 points less. Polina Novozhilova (Ivanovo) won the bronze medal. Having scored 6,5 points, she took the lead over Alisa Surivtseva (Togliatti) and Anna Krupnova (Moscow) according to the additional index.

Kazybek Nogerbek (Kazakhstan) with 8 points is number one in the group of U11 Boys. Rudik Makarian (Moscow), Raffi Ghazaryan (Armenia) and Dmitry Kirillov (Ivanovo) are half a point behind. Makarian was awarded with the silver and Ghazaryan with the bronze thanks to the additional index.

Danila Pavlov (Volgograd) is the first to finish the U13 Boys’ Tournament. He scored 8 points and the additional index allowed him to lead over Kirill Shubin (Vladivostok). Rostislav Marchuk (Barnaul) with 7 points won the bronze medal, his additional index was better than Kazybek Umbetov’s (Kazakhstan).

Aleksandra Maltsevskaya (Volgograd) with the best result equal to 8,5 points is the winner of the U13 Girls’ tournament. Marta Voskresenskaya (Surgut), Adelya Zinatullina (Kazan) and Viktoriya Loskutova (Barnaul) scored 7 points. The additional index allowed Voskresenskaya to win the second place, and Zinatullina – the third.

Irina Barbaeva (Ust-Ordynsky) with 7,5 points won the gold in the U15 Girls’ Tournament. 7 points, scored by Anna Khristenko (Kurganinsk), allowed her to take the second position. The bronze was won by Alina Guskova (Ryazan region) with 6,5 points.

The winners of each age group will be awarded with the grants for the free hospitality package (accommodation and meals) at the World School Chess Championships, which will be organized this April in Thailand.

Final results of all age groups

Five players share the lead in Tal Memorial
The two earlier leaders, Alexander Morozevich and Vladimir Kramnik, were defeated in the 7th round of the Tal Memorial by the tail-enders Evgeny Tomashevsky ...

Gibraltar Masters Round 2
The second round of the 2012 Gibraltar Chess Masters was played on Tuesday. Similar to the first day, there were no major upsets, except ...

Andrey Filatov: We are just at the start of a long journey
On June 1, the International Children's Day, Dagomys will host another final of White Castle, a team chess tournament for schools. For the second ...