On one of the perfect days of Georgian winter, drinking a cup of hot tea at home in Tbilisi, thinking how boring the winter was, I received a facebook message from Martha Fierro, the secretary of the FIDE Women Commission (“WOM”) presided by former Women World Chess Champion Susan Polgar.

She was asking, if instead of going to Zurich Open, I’d like to participate in the promotional tour of women chess, as a FIDE Women Chess Ambassador in Madagascar at the end of the year.

Chess promotion, being one of my favorite fields, I immediately accepted the offer, passing quite unusual Christmas in the long flight, hanging in the sky somewhere between Antananarivo (the capital of Madagascar) and Mahajanga (Northern part of the country where the event was held).

Well, my last Christmas I was in Doha airport, in Qatar, coming from Jakarta, Indonesia. So, let’s say, I’m already quite experienced in spending Christmas in uncommon locations. 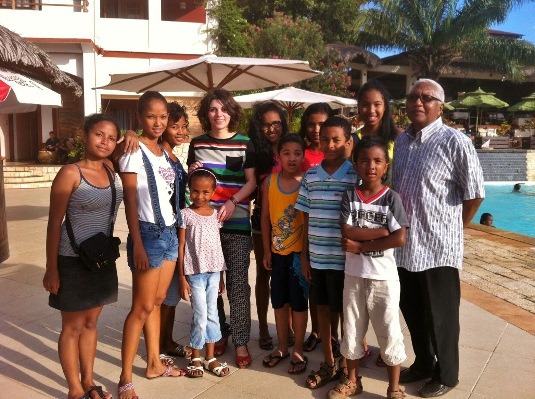 While talking in the car on the road from the airport to the Hotel “Roches Rouges”, I found out some interesting information. While in France, most of the amateur chess players are by profession Mathematicians or Informaticians, in Mahajanga, most of the chess players are doctors and persons having a medical background.

That was quite helpful later, when one day during the trip, I accidentally ate some of sea food and got my typical small allergic reaction with somewhat asthma-like episodes. Special thanks for that day to my doctor Pr. Ralison Fidiarivony, who is also the President of Mahajanga (Boeny) Chess Federation.

Hardly out from the plane, stepping for the first time on Malagasy ground, I was blitzing and having friendly games in the very same Christmas evening. Well, that’s the world of chess no matter where you are!

I finally got back to the hotel in the late evening and went to the bed surrounded by few lizards, wondering who would be my students on next day, and how many girls. I was impatient to start the lessons with them. I again had a glance on one of the lizards sitting on the wall. In normal days, I would have screamed loudly “HELP” “Please, somebody, save me!” but I knew I was in Mahajanga, and there was nothing to do about. Hotel was wonderful but everybody confirmed that small lovely lizards are everywhere in Madagascar and one has to get used to that idea.

Next day we started by press conference where I explained to local journalists the goal of my visit, followed by the 3-hour formation for the Malagasy female chess players. So, finally they were here! It was a nice surprise to discover that some of them are quite good, around 1900-2000 FIDE rating according to my personal estimation. But having no international tournaments, they are simply unrated. 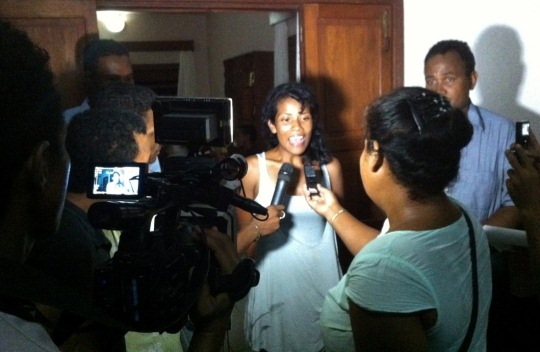 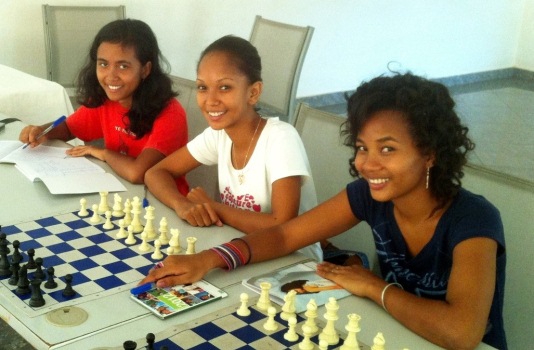 Giving them intensive lessons on four consecutive days was a real pleasure. Girls from Antananarivo and Mahajanga, aged from 7 to 25, later joined by some new comers, up to 30 years old.

They were well-motivated and well-equipped for taking tones of strategic advices about middle game and endgames. They also received some general chess culture, showing to them one by one the Women World Champions and their games. None of them knew who was the world’s first Woman Champion (Vera Menchik), neither the second or third. Some of them never even heard about Hou Yifan or Judit Polgar.

Now everybody knew the name of “Susan Polgar” as the chairman of the Women Commission and initiator of my trip, but it was funny to see their surprised faces when discovering that Susan was also one of the World’s Champions!

The problem is that not everybody has internet at home in Mahajanga and in general internet is expensive. So, not everybody can permit herself to play chess online or surf on different chess sites.

Giving a simul to about 30 players on my second day, the hotel “Roche Rouge’s” not only director but all hotel personnel and guests got very interested in chess.

Sitting in the restaurant in the hot evenings of Mahajanga after my lessons, I was always questioned about chess by guests of the hotel. Each time I had very enjoyable conversations satisfying everybody’s curiosity. 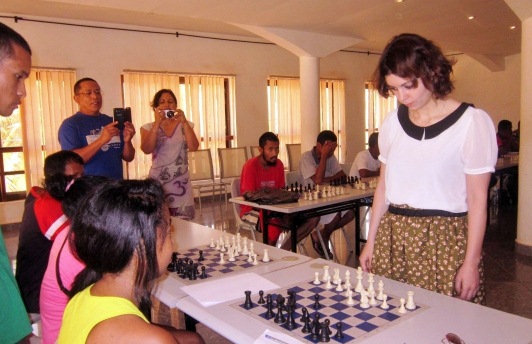 One of the evenings, the director of the hotel who didn’t know how to play chess, called all his employees of the restaurant. All of them appeared standing in the line like an army, waiting for the reason of their appeal.

The Director asked “you have kids, haven’t you?”. “Oui Monsieur” (Yes, Sir) “Ma fille a dix ans” (my daughter is ten years old) answered one of them. Here the surprise came: “From tomorrow all of you will have free chess lessons with Dr. Luc Narda paid by me, to initiate yourselves with your children to that game!” “Merci monsieur!” “Merci beaucoup!” was answered by surprised-happy employees.

Who knows? Maybe one day we will see a Malagasy Grandmaster thanks to the butterfly effect?!

On next day the director’s fiancee which arrived from Antananarivo, a business woman, joined my chess lessons after what she decided to continue train herself in Mahajanga with above mentioned Dr. Luc Narda.

It is always hard to leave a place, full of heartwarming smiley faces. Kids waiving hands, saying thanks, expressing their gratitude to Susan Polgar and WOM!

My flight from Mahajanga was delayed. In the airport of Antananarivo, I was bit worried, almost missing the flight to Paris. I’ve had noticed that passport control is very slow in the airport, so I passed my passport to the officials with somewhat stressed face. Waiting for traditional “where do you go – from where you came” questions, suddenly I heard “Which opening do you like most?” “Sicilian” “OK” and he quickly closed my passport.

I think I had bit silly look with a surprised face, so the controller explained that he recognized me from TV and being by himself a chess player in the capital, was happy to see me. 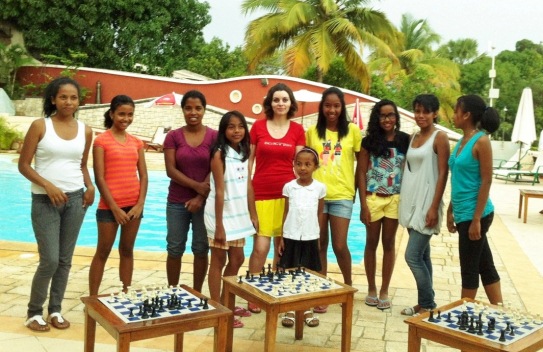