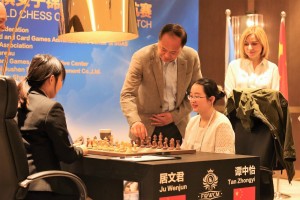 3:00pm 3rd May Beijing Time, 2018 FIDE women’s world chess championship match begins inside InterContinental Hotel Jing’an Suburb Shanghai. After 5 hours long contest, the challenger Ju Wenjun and the current champion Tan Zhongyi end up with a draw in this first game.
In the opening, Tan Zhongyi chose the queen’s gambit accepted with black，that was not what Ju Wenjun was expected for. Ju Wenjun spent a lot of time on opening, whereas Tan Zhongyi did it quick and meant to maintain the complex position.
There is big time difference on the clock, however there in no obvious advantage on the board. Been a while, Tan Zhongyi was the more active side. And then the fight was concentrated in the middle of the board.After a sharp move 14…Ne5，Tan Zhongyi decided to brought the game into a fierce battle. Later in the post game conference, they had different opinion about this move, Tan Zhongyi believed that was necessary while Ju Wenjun thought that another simple move such as 14…Be5 will bring black into a better position. In their game, after some fight under time control, Ju Wenjun brought it to a Knight Pawn – Bishop Pawn ending. Continuous Pressure from Ju Wenjun during the next nearly 30 rounds, Tan Zhongyi dealt with them all. Drew is announced and ended this 63 moves first game.
Later in the post game conference,Tan Zhongyi says she was psychological prepared. Be honest, was more prefer to have the white in the first game. But accepted the challenge and did it well since already had the black. Ju Wenjun says it is not rare having a 5 hours matching. Quality is what she cares about.

Ju Wenjun and Tan Zhongyi are the same age. Being teammates fighting for honor, they are more like good friends. In the past 3 years, Ju Wenjun’s score doesn’t look as good as Tan Zhongyi’s. Ju Wenjun was asked wheather this gonna be a pressure? She says:Past results never be my concern, every match is a new beginning. Tan Zhongyi and me we know each other very well, that will make this match a brand new experience and I am excited for it.

When they were asked about the difference between classical robin tournament and this match, Tan Zhongyi said this is a challenge for her, while Ju Wenjun felt this kind of form helps players stay focused. And both of them were satisfied with today’s game and result.

3:00pm 4th May, will knock the 2nd match bell. Tan Zhongyi will play white. Ju Wenjun won the game with black and took the lead. 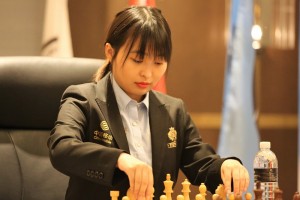 report and photos by: Gu Xiaobing