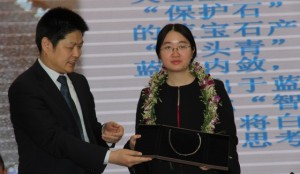 The 2 players are both from China, that is to say, China has clinched the Champion already. For this certainty, Ye Jiangchuan, the head coach of Chinese Chess team said: “we are delighted whoever wins the match”, “Normally, our players are asked to take part in national team training before the match when competing with foreign opponent, however ,this time their respective teams will responsible for preparations and we will not interfere too much.” Ye Jiangchuan also told reporters that both of them have the chance to win because the two players are really well matched.

“Players’ mentality, on-the-spot performance, even the physical and psychological state of the day will all affect the result of the competition.” said Ye Jiangchuan ” whether a chess player is steady and calm mentally or whether he would recover quickly from the stress of temporary failure will definitely have an impact on the match.” Ye Jiangchuan said so.
At the news conference, Tan Zhongyi said she is ready for the upcoming defending battle. “After last year’s victory, I had already knew who the challenger is (Ju has gain the right of challenge )and made a year long preparation.” Tan Zhongyi said she had enough confidence in the competition, which based on the adequate preparation and her own strength.”

Meanwhile, Tan Zhongyi also expressed that it is impossible to predict what the outcome will be as the situation in the game may change every minute it goes, and what she has to do is doing well in each step. “As for the expectation of the game, I have to say I will strive to give my best. After all, the charm of competitive sport lies on its unexpectability.”

This is the third time for two Chinese players to join in the match in history. The first one was between Xie Jun and Qin Kanying in 2000. the second time is ten years later, then 16-year-old Hou Yifan defeated the teammate Ruan Lufei being the youngest Chess Queen in chess history.

Live games with analysis will be provided daily on Chessdom with the best chess software competing in the Top Chess Engine Championship – Komodo, Houdini, and Stockfish.