Hou Yifan scored the third victory in game six of the FIDE Women’s World Championship Match and is now leading by 4,5-1,5. Yifan only needs one point from remaining four games to recapture the title of World Champion.

The reigning Women’s World Champion Anna Ushenina deviated from the Nimzo-Indian defence, which earlier brought her two losses, so Yifan used the Queen’s Indian defence instead.

Later black set the pawn structure that resembled the Benoni, but the position remained equal throughout the first 30 moves. 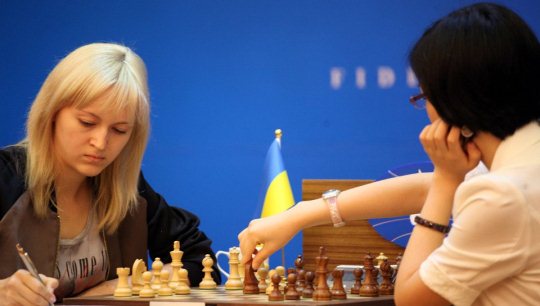 Once again Ushenina had a poor handling of the clock and she run into time trouble having around three minutes to complete ten moves.

Precisely then Yifan decided to complicate matters with 31…c4. This proved to be success as Ushenina erred 33.Bd4? and her position quickly collapsed.

This was the third loss with white pieces for Ushenina. With black she made three draws.