GM Hou Yifan (CHN, Elo 2639), the 18-year-old rising star in the world of chess, arrived in Bangkok earlier this week to compete in the 12th Bangkok Chess Club Open at the Dusit Thani Hotel.

While this is her first time in Thailand, many of the approximately 230 players from around the world have returned to participate in either the Open or the Challenger category.

Ms. Yifan’s presence, together with that of many other world-class players, gives prestige to a chess event that in recent years has become one of Asia’s best.

The women’s world champion will battle for the top spot against strong rivals, including the tournament’s highest-ranked player and longtime supporter of the BCC Open, GM Nigel Short (ENG, Elo 2697). Both GMs demonstrated their great form at last January’s Gibraltar Chess Festival when they finished first and second in a field that included 55 GMs.

On Wednesday, Ms. Yifan met with a great number of VIPs and aspiring chess talents. First, at Shinawatra University’s city campus she visited the library’s chess corner and mingled with university students and young talents. 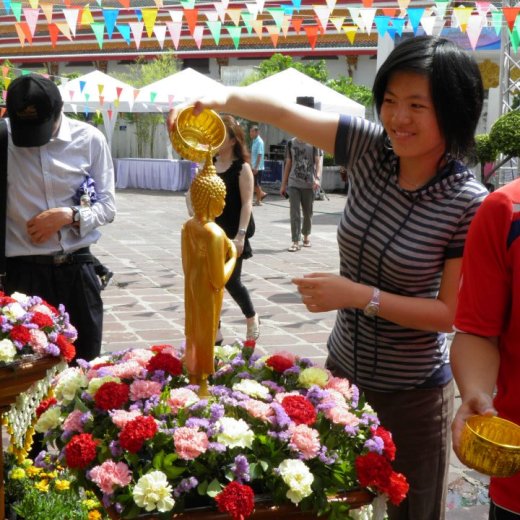 For the second year in a row, SIU is a valuable sponsor of the tournament thanks to chess devotee Deputy Prime Minister and Finance Minister Mr. Kittirat Na Ranong.

These representatives of Thailand and China honored Ms. Yifan for her outstanding achievements and thanked the young players, sponsors, and organizers for their great efforts. After a well-orchestrated photo session the champion played a chess simul against thirty children, students, and sponsors.

While everyone played with passion and skill, Ms. Yifan took this as a welcomed warm-up for the main event as she brushed aside her last opponent after only two hours. The indisputable score: Yifan 30 – grateful opponents 0.

Especially for the children and their proud parents who must have been pleased with the kindness of Yifan and Thailand’s top politicians and impressed with the venue, this was a day they are unlikely to ever forget. And there is no doubt: thanks to the efforts of the BCC, the Thailand Chess Association, schools and universities, chess in Thailand is a sport rapidly on the rise.

For updates about the tournament, reports, interviews, analyses and pictures, please visit bangkokchess.com and facebook.com/bangkokchessclub.