The Bulgarian, playing White, decided to test her opponent’s knowledge in a very sharp opening variation known as the Slav Gambit: White sacrifices a central pawn, but forces Black to keep the king in the center and obtains long-lasting initiative.

Ushenina, however, deviated from the main lines, and by the 10th move the players reached an original position with complicated strategic and tactical pattern. 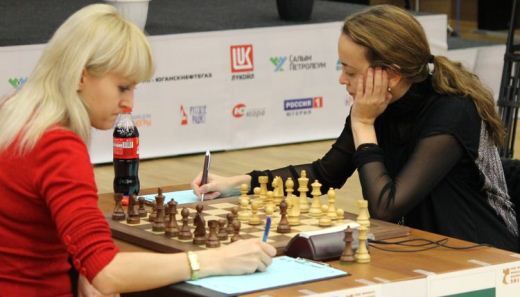 The position looked more promising for White, but Stefanova possibly misplayed it on the next few moves. Ushenina could sacrifice a pawn for the initiative and try to utilize her development lead. This would create a very sharp game risky for both sides.

However, the Ukrainian preferred a safer path, simplifying the position, and the players agreed to a draw already on the 17th move on a half-empty board.

The match score is 1-1. The third game of the final is played on Thursday, November 29th, Anna Ushenina has White.