The World Chess Championship 2015 for the Disabled started with the Opening Ceremony in the Philarmonie Hall of the Windham Garden Dresden Hotel at 19:00 on 17th October 2015.

This year’s edition has gathered 67 participants from 14 federations. The competition will have two separate ratings. The primary one will be an individual competition as well as a team competition. The 2nd World Chess Championship for the Disabled is being organized by ZMDI Schachfestival Dresden e.V. who were also the organisers behind the tournaments 2011 and 2013.

The Opening Ceremony started with the greetings of the President of the ZMDI Schachfestival Dresden e.V. Dr. Dirk Jordan who welcomed the participants to Dresden and wished them good games and victories.

The guests of honour who were present at the Opening Ceremony were: the Mayor of Dresden Dr. Peter Lames, the President of the German Chess Federation Mr. Herbert Bastian, the Chairman of the FIDE Chess for the Disabled Commission Mr. Thomas Luther and the FIDE Executive Director Mr. Nigel Freeman. All of them addressed the audience highlighting the importance of having such an internationally important tournament showing that inclusion is possible on all levels. The Mayor emphasized that Dresden is very excited to have such a variety of nationalities enjoying the cities hospitality. 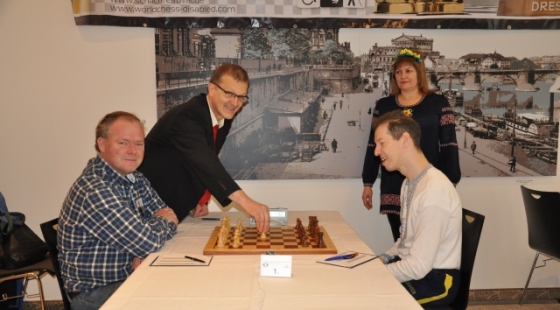 A group of local children presented the flags of all participating nations and the attendees witnessed a performance of two talented local dancers.

Round 1: A great start into a promising tournament

Round 1 of the World Chess Championship for Disabled 2015 started on 18 October at 9:30 as per the schedule. The first ceremonial move was made by Herbert Bastian, the President of the German Chess Federation.

All was off to a smooth start, the organisers did a great job in accommodating all needs of the players. No surprises happened in the first round, all the favourites won. However, there was one remarkable game: Alena Mikhalionak (Belarus), who played black, drew with Miheso Chomu Clement (Kenya) despite having a rating difference of 500 elo with her opponent.

The state TV company was present to cover the start of the World Chess Championship for Disabled. Over the course of the tournament they will be conducting interviews with players and volunteers which will then feature in a program about the event. It is a great achievement to have the German TV dedicating their time and programmes to Chess for the Disabled as this will provide great publicity on all levels.