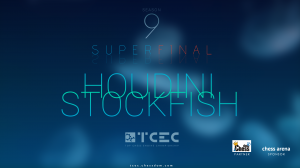 At this moment two of the top individual chess championships are going on – Carlsen vs Karjakin World Chess Championship and Stockfish vs Houdini TCEC Superfinal. Both are multiple games head to head matches, both boast a record high ELO in history, and both have attracted huge audience.

But here is where similarities end. The dynamics and development of the story in each of the matches have gone in diametrically opposite directions. Nor Karjakin nor Carlsen (despite having chances in game 3) has managed to score so far in the match, leaving the chess fans waiting for a decisive game with 1/4 of the match gone. The World Champion and his Challenger have opted for safe positions, understanding that a minimal mistake can have high cost in such a short 12 games match. At this point it seems a blunder rather than a brilliancy will decide the outcome. On the other hand, in the TCEC Superfinal the chess fans are viewing an onslaught. The new version of Stockfish 8 is steamrolling the new Houdini 5, the score being 10,0-6,0 after 16 games. Stockfish is having a ball with white, extracting the maximum advantage from every given position and bringing up the game of chess to a whole new level. And all this coming as a surprise after Houdini’s development version won the qualifications and the rapid just a few weeks ago, convincingly ahead of Stockfish. 84 games are left in TCEC, but Stockfish is now the clear hot favorite for this year’s title.

Today is game 4 of Carlsen – Karjakin, where the Russian will have the white pieces. You can follow the game live here

The 44 cores server behind TCEC brings out the best chess computers have produced so far in the Top Chess Engine Championship. Despite crushing lead for Stockfish, games are still individual masterpieces. You can follow TCEC all day long live at the official website

Replay the decisive games with analysis