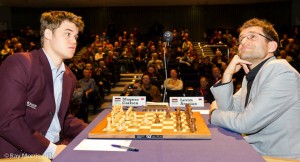 The World Chess Championship 2018 is going to take place in London. This is what the renowned Spanish journalist Leontxo Garcia writes for the chess section of El Pais, quoting two “close sources” to the organization of the match. “The dark management of the AGON company has at least one positive side: their commitment that the venues are very important cities,” says Leontxo Garcia. After the Candidates in Moscow, the World Championship in New York, and the Candidates 2018 in Berlin, the World Chess Championship 2018 seems to be heading to London. AGON says the decision is not official and other venues are still possible.

World Chess Championship 2018 – who is playing

The World Chess Championship 2018 will have a hefty prize fund. Carlsen will meet the winner of the Candidates matches in Berlin. The contenders will be:

The winner and runner-up of the just finished World Cup in Tbilisi are Levon Aronian and Ding Liren. The Chinese also had a chance to qualify through the Candidates where a stage remains in Majorca, however now most probable winner of the Candidates spot will be Shakhriyar Mamedyarov , with lower chances for Alexander Grischuk and Teimour Radjabov, while for Hikaru Nakamura and Maxime Vachier Lagrave the chance is mostly theoretical.

According to the FIDE regulations, “For the purpose of deciding the 2 rated player qualifiers, the average from the following twelve FIDE rating lists will be used: the sum of all 12 monthly lists starting from 1st January 2017 to 1st December 2017 divided by 12.” The race is hot with Vladimir Kramnik, Wesley So, and Fabiano Caruana within just a few points distance. With a couple of important events remaining, like the European Club Cup 2017 anything is possible and the fans may see a photo finish of this race.

The last question mark regarding the possible opposition of Carlsen for the World Chess Championship 2018 is the wild card for the Candidates. This depends mostly on the organizers and sponsors, but it is expected that the player will have ELO of above 2700.

London as a host city of the World Chess Championship 2018

The first time London surged as a possibility for the World Chess Championship was this spring, when also Norway, South Korea, Japan, or Singapore were showing interest. Then FIDE President Kirsan Ilyumzhinov said, “I have arrived to England on Tuesday, where I met with businessmen and lawyers who said they were ready to assist in holding the world chess crown match in London,” Ilyumzhinov told reporters on Tuesday night. “So, another contender has emerged.”

Now with the confirmation of El Pais the London bid is becoming reality as we are awaiting official confirmation from the organizers.