The World Chess Championship for Disabled 2015 has come to an end. Lakhdar Mazouz of Algeria, Advisor to the FIDE President in chess development in Africa was an official guest of the Round. He has made the first ceremonial move on Board 1 in the game Smirnov vs. Gurbanov. Also, Mr. Mazouz gave an interview having shared his opinion on the organization of the World Championship for Disabled. 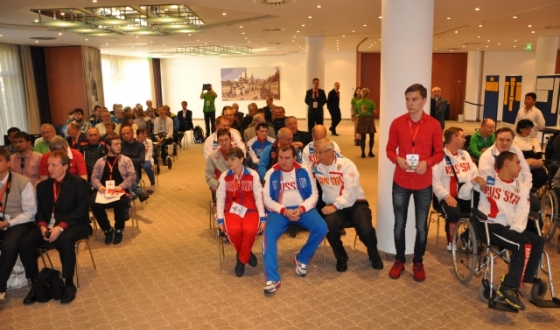 Alexey Smirnov of Russia has become the World Chess Champion for Disabled 2015. Silver medal goes to Babarykin Stanislav of Russia and Stanislav Mikheev of Russia became the bronze medalist of the championship.

The best IBCA player is Alexey Smirnov of Russia. The second and third places go to Stanislav Babarykin (Russia) and Yuri Meshkov (Russia).

The best IPCA player was announced Stanislav Mikheev of Russia. Silver and bronze in IPCA section are given to Andrei Gurbanov of Israel and Igor Yarmonov of Ukraine.

The best ICCD player became Vladimir Kovalenko of Ukraine. Tomasz Miozga of Poland and Balazs Mate of Hungary have got the second and third places respectively.

The best team of the championship was IBCA Team from Russia. The Ukrainian combined team got the Silver medal. The IPCA Russian team finished the third in the team competition. 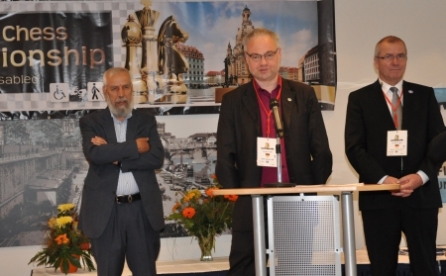 At 16.00 the same day the Closing Ceremony and Award Ceremony were held in Wyndham Garden Dresden hotel. It was started with the Anthem of the World Chess Federation FIDE. Dr. Dirk Jordan, the Chairman of the ZMDI Schachfestival opened the ceremony and thanked all the participants for their interesting battles on chess boards. He also expressed his sincere gratitude to the team of arbiters, volunteers and partners.

Chairman of the FIDE Chess for Disabled Commission Thomas Luther also congratulated all the chess players with successful end of the championship. He announced the next World Championship for Disabled will be held in 2017 in Dresden again. Mr. Lakhdar Mazouz took a floor and pointed out that the organization of such championships for disabled players is an immense step forward in development of chess not only for disabled players but for all other chess fans in general.

The Chief Arbiter of the championship Egmont Poenisch announced the results. The medals and diplomas were awarded to the winners of the Championship. The national anthem of the Russian Federation was played in honor of Individual and team winners. The Championship was announced closed.