In this connection an MOU will be signed between World Chess Federation (FIDE) and the All India Chess Federation & Tamilnadu State Chess Association today at 04.00.P.M. at hotel Raj Park, 180, T.T.K.Road, Alwarpet, Chennai – 18.

Update: FIDE Vice President, Israel Gelfer signed a Memorandum of Understanding with the All India Chess Federation in Chennai regarding the World Championship Match 2013.

AICF and Tamil Nadu State Chess Association will be responsible for holding the match in Chennai, India on dates 6-26th November, 2013. The organizational costs will be 3,367,250 USD.

The contract will be drafted soon. 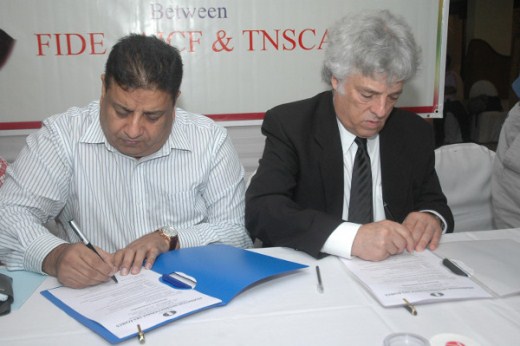