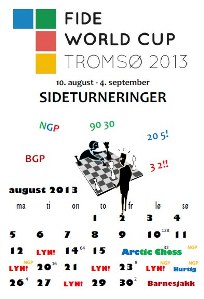 Tromsø Chess Club (TSK) and Tromsø Youth Chess Club (TSKU) are organizing a series of open tournaments while the World Chess Cup is being played in neighbouring venues.

In all likelihood, many of the title players who are knocked out of the World Cup will play in these tournaments.

Arctic Chess NGP, an international weekend tournament, will be held on 16-18th August as a seven-round swiss open. The total prize fund is 5000 EUR.

The legendary TSKU chess cafe will be operating outside the playing venue throughout the tournament.