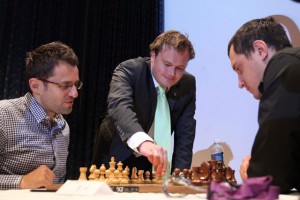 The first games of the opening round started in Tromso after Commissioner for Business, Culture and Sports of Tromso Municipality, Mr. Jonas Stein, made the first symbolic move in the Aronian-Markov game.

The first game of Round 1 of the World Chess Cup 2013 has been played in Tromso, Norway. The first day was marked by strong security measures, interesting games with a few surprises, and a minute of silence for GM Kurnosov.

The first games of the opening round started in Tromso after Commissioner for Business, Culture and Sports of Tromso Municipality, Mr. Jonas Stein, made the first symbolic move in the Aronian-Markov game.

Because of the 15-minute delay before the first game the players got an opportunity to
speak with their chess friends.

Before the round the players stood up for a moment of silence in memory of the
recently passed Russian GM Igor Kurnosov.

Current European Champion GM Alexander Moiseenko had a rest day today. His
opponent GM Adly Ahmed from Egypt was prevented from playing in the FIDE World Cup
due to obligatory service in the Egyptian Army.

Sofia Rules are not in force at the tournament so it’s up
to the players to decide when they want to offer a draw.
The first game to finish was Zvjagintsev-Swiercz, 12 moves.

Susan Polgar and Lawrence Trent working for the live coverage of the FIDE World Cup 2013.