The third games of the final matches of the World Chess Cup were played on Sunday, September 18th in Khanty-Mansiysk. The game between Russian Grandmasters competing for the main prize ended first, just like yesterday.

However, unlike yesterday, today the game was much longer and more tense. Grischuk, playing White, once again started with e2-e4, and Svidler decided to deviate from the first game, opting for the Ruy Lopez instead of the Sicilian. On the third move Svidler surprised the opponent with a rare move 3…Bc5. Grischuk clearly did not expect it, so he started to think, but finally decided to go for the main line, where White aggressively breaks in the center.

Svidler offered to exchange queens, accepting a worse ending. However, in the endgame Grischuk’s time trouble began to tell. He was unable to stabilize the position and gave up a pawn, but his pieces developed significant activity. Svidler also started to take his time, and then accepted more exchanges, which made a draw inevitable. 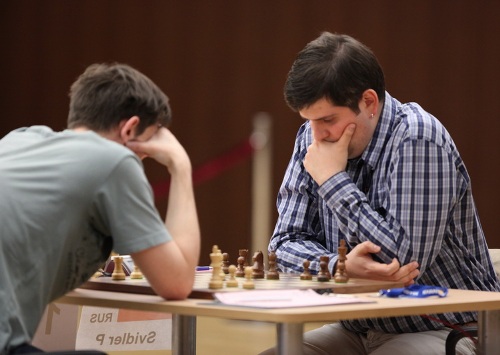 Svidler said that Grischuk’s time trouble did not tempt him to take additional risks in this game: “Grischuk often plays under strict time pressure. I realize that he is not going to lose on time or even make an inferior move, so I have to keep playing according to the positional demands”.

“Of course, my position was more pleasant, – said Grischuk, – and the main question was whether I can develop my pieces and play c4. If I can do this, I will have a big advantage. If not, I’ll have nothing. In the end my losing chances are higher than my winning chances, but a draw is still the most likely outcome”.

Vassily Ivanchuk and Ruslan Ponomariov played the Gruenfeld defense is their match for the 3rd place. The transition from the opening to the middlegame was unsuccessful for Ivanchuk, who lost a pawn. 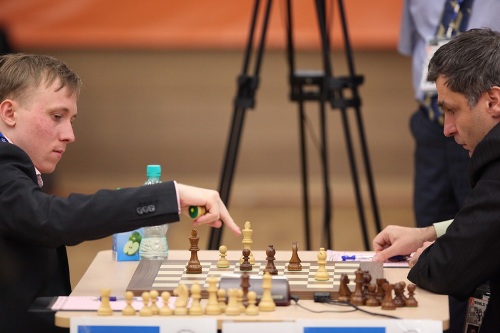 Ponomariov tried to convert his advantage, but the game had clear drawing tendencies – the players had the opposite-colored bishops, and all the remaining pawns were located on the kingside. In the end Ivanchuk constructed a fortress, and when Black tried to break it, White sacrificed a knight for the last two pawns, reaching a drawn ending with a bishop and a knight against a bishop, with no pawns left on the board.