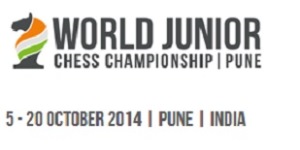 The tournament will be played according to the Swiss System in 13 rounds. Only FIDE ratings will be used for the pairings.

No draw offers are allowed before move 30. All other regulations apply as per FIDE Handbook, including zero default time (article 6.6.a of the Laws of Chess).

The winner of the 2014 World Girl Junior Championship u20 receives the WGM title. She also qualifies to the World Women’s Championship 2015.

The silver and bronze medalists of both categories (open/boys u20 and girls u20) receive the IM and WIM titles respectively. 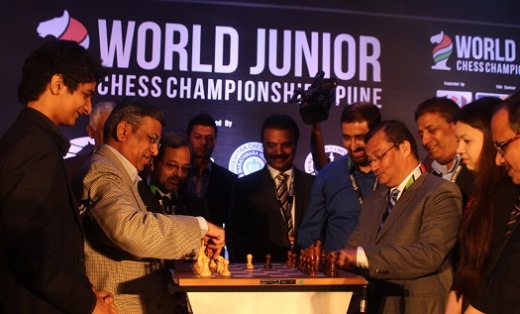 At a glittering ceremony at Hotel Hyatt, attended by eminent dignitaries from the sporting, entertainment and corporate world, the World Junior Chess Championship (WJCC) 2014 was declared open in Pune.

The Chief Guest of the function S K Roy, Chairman, LIC speaking on the occasion said, “I am thankful to Maharashtra Chess Association for inviting me to inaugurate this prestigious tournament. The game of chess has its origin in India and the country has produced many Champions who have won international accolades. I can see a future World Champion in each one of you and would like to wish every participant all the very best for this tournament. Life Insurance Corporation of India is proud to be associated with this championship and we would like to extend our wishes to the organizers of this tournament in making this event, a grand success.”

Mr Ashok Jain, said, “It is indeed a moment of great pride for me and my entire team to organize this Championship for the first time in Maharashtra. MCA has been carrying out various initiatives for the development of the game of chess in the State. We have initiated the novel Maharashtra Chess League (MCL), the first Chess League in the country which has been a big hit in both its editions. MCA has also introduced the ‘Chess In Schools’ (CIS), another initiative to introduce chess at the grass roots. Currently there are 186 schools with about 9500 students enrolled in the programme and the target is to reach out to 500 schools and about 50,000 students in the next couple of years. I am sure that these initiatives will go a long way in creating more and more awareness for the game of chess in the State and the country and assist in producing many more Champions. I wish you all luck and encourage you to play good quality and competitive chess.”

Addressing the gathering, Mr Aniruddha Deshpande, said, “I welcome all the dignitaries, officials, coaches and players to the city of Pune. Apart from academics, Pune has also become an important centre for major sporting activities in India and chess has a rich tradition and culture in our city. The city has produced many a champions and I am sure that this championship will provide an ideal platform for our players to interact and get exposed to global talent. I would like to thank the Government of Maharashtra and all our sponsors for their support to this tournament. Our entire team is highly elated and charged up at organizing this grand championship and would like to assure you that we will leave no stone unturned in making this championship truly memorable and a grand success.”