Vijay Kumar presents the round 10 video.

These victories ensured that the Chinese maintained their joint leader status with 8 points each. Aravindh Chithambaram, Ankit Rajpara and Diptayan Ghosh along with 10 other foreigners are trailing in second place with 7 points each.

In the Girls section, top seed Aleksandra Goryachkina who had shot into sole lead, enhanced her lead with the shortest victory in this edition of the World junior defeating Sarasadat Khademalsharieh of Iran in just 10 moves.

India’s strong contender for the title, Padmini Rout slipped back farther with a draw against Meri Arabidze of Georgia. Aleksandra has now tallied 8.5 points and Ann Chumpitaz of Peru is trailing a point behind in second position. Padmini Rout, Srija Seshadri along with five overseas players are bunched together in third place with 7 points each. 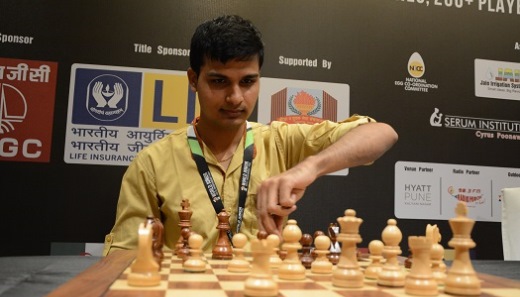 From the Indian angle, the day belonged to rising talented teenager Aravindh Chithambaram who showcased his defensive skills and perseverance in wriggling out of an inferior position against super GM Jorge Cori of Peru to split the point. S L Narayanan after making a GM norm yesterday ended on the losing side against Ankit Rajpara in an English game which lasted 44 moves.

Playing against the Sicilian defence adopted by Cori, Aravindh castled on the queen-side and spent the early part of the game trying to repulse an attack on his King. Cori did not castle and spent his time and effort in enhancing his advantage. By the 45th turn a loss loomed large for Aravindh as his pieces were pushed back and they lacked co-ordination. However a blunder by Cori on the 45th turn in the form of a knight move had Aravindh immediately retaliating with a tactical stroke which earned him a pawn and better square for his pieces. The table turned to such an extent that Aravindh appeared better by the 67th turn but the players decided to call it a day on the 77th move by repeating their moves. An exhausted Arvind later confessed “I am mentally unable to understand the hidden aspects in this position as the game was so complex but it was really bad for me in the middle-game.”

Sarasadat appeared to lose way in the Opening stages of a Queen’s Gambit against Aleksandra on the 9th move itself. A move later, landing in an inferior position, the Iranian preferred to resign rather than continue in agony and almost rushed out of the tournament hall in tears.

Three more rounds are remaining in this 13 round grueling event sponsored by LIC and Government of Maharashtra and Amanora, ONGC, Jain Irrigation and Everstone are the Associate sponsors.