Vijay Kumar presents the round 11 video.

Wei Yi of China continued his merciless march towards the title with a comprehensive victory over Karen Grigoryan of Armenia in the 11th round of the World Junior Chess Championship being played at Hotel Hyatt, Pune.

His compatriot Lu Shanglei who had been matching pace with him was held to a draw by Griogriy Oparin of Russia. Wei is the sole leader now with a tally of 9 points while Shanglei is the sole occupant of the second spot with 8.5 points.

Kamil Dragun of Poland and Duda Jan-Krzysztof of Poland defeated Aravindh Chithambaram and Irakali Beradze respectively to move up to third spot with 8 points each. Top seed Vladimir Fedoseev also defeated Diptayan Ghosh to tally 8 points.The other games were in progress at the time of going to press.

Even as less fancied Indians struggled on the top boards, Vidit Santosh Gujrathi who had been bogged down , covered some ground by defeating Christopher Repka of Slovakia to total 7.5 points. Karthikeyan Murali also accounted for Balazs Csonko of Hungary. 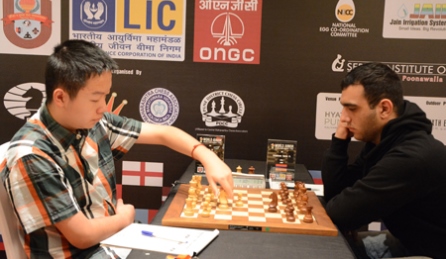 In the Girls section Padmini Rout was battling against Ann Chumpitaz of Peru in an equal position while Srija Seshadri defeated P V Nandhidhaa.

Grigoryan opting for the Petroff Defence perhaps was an indication of his mind-set for this defence has become a popular weapon with Black to enhance drawing chances at the higher level of the game.

However Wei who has been in tremendous form, played simply and effectively to capitalize on his extra pawn and positional advantage by exchanging pieces to reach a winning queen and pawn ending. Grigoryan resigned on the 33rd move when Wei threatened to march his pawn to the queening square.

The Queen’s Gambit game between Dragun and Aravindh had interesting moments in the Opening stages with the former’s King literally pulled out into the open after the early exchange of queens. Interestingly Dragun’s King walked back to the castled position even as Aravindh failed to maintain the balance of the game. Dragun kept improving his position and after the transposition into the rook pawn ending, the King again walked onto the queen-side to escort his two passed pawn and sealed the game in his favour after 51 moves.

Two more rounds are remaining in this 13 round grueling event sponsored by LIC and Government of Maharashtra and Amanora, ONGC, Jain Irrigation and Everstone are the Associate sponsors.