Vijay Kumar presents the round 4 video.

S L Narayanan has been a regular visitor to Pune for Maharashtra Chess League (MCL) and had gained a reputation for shocking seeded players. In the fourth round of the LIC World Junior Chess championship in progress at Hotel Hyatt, the teenager from Kerala true to his reputation once again upset higher rated Polish GM Kamil Dragun to bring cheer to the Indian camp.

In the Girls section, Padmini Rout defeated Mona Khaled of Egypt and has once again joined overnight sole leader Daria Pustovoitova at the top of the points tally with 3.5 points along with Sarasadat Khademalsharieh, Ann Chumpitaz and Nguyen Thi Mai Hung.

The top board game between overnight sole leader Daria Pustovoitova and her Russian compatriot Aleksandra Goryachkina in a Slav defence ended in a draw after 38 moves. Maria Ivana Furtado playing with Black pieces held higher rated IM Meri Arabidze to a draw after 35 moves and is trailing half a point behind the leaders.

In the Open section Cori Jorge of Peru with four points in as many rounds shot into sole lead with a victory over Idani Pouya of Iran even as the encounter between other over-night joint leaders Vladislav Kovalev of Belarus and Wei Yi of China ended in a deadlock. Narayanan, Wei, Kovalev, Karen Grigorayan and Mikhail Antipov are trailing half a point behind the leader. 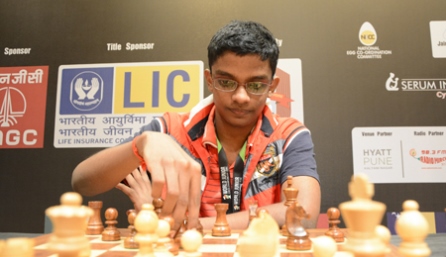 N Srinath also played creditably to earn a vital half point against top seed Vladimir Fedoseev considering the fact that the Russian is ranked in the top 100 in World Ratings. Vidit Santosh Gujrathi conceded another half a point to Chinese GM Lu Shanglei and has tallied 3 points.

10-year-old Nihal Sarin who created waves in the first three rounds of this tournament co-sponsored by Amanora, ONGC, Jain Irrigation and Everstone was defeated by Rahuri based Shardul Gagare. ” It was a very complicated game and knowing that Nihal is good at tactics, I tried to play positionally and succeeded” said Shardul.

In a Queen’s Gambit Declined game Narayan was better in the Opening stages but lost way mid-way against Dragun. “Then, I desperately had to try and create complications on the board or risk a loss. Fortunately for me Kamil misplayed and once my knight broke through in the centre, the road to victory was clear” said the shy and un-assuming lad who pocketed the point after 47 moves.

The Queen’s Gambit game between Vidit wielding Whites and Lu Shanglei was entirely focused on the Queen-side and what one witnessed was a fast and furious exchange of pieces and pawns from 14th to 28th turn. It was hardly surprising therefore when the players shook hands on the 31st move when each had a knight and four pawns each. The pawns on the queenside were totally polished off in the game which lasted a little more than an hour.

WGM Swati Ghate commenting on the game quipped “I can come up with the explanation that it is a long and tiring 13 round event and therefore the players may have opted for some extra rest period”.