Vijay Kumar presents the round 7 video.

In the most sensational result of the day Goa based Anurag Mhamal defeated second seed Robin Van Kampen of Netherland in the dying stages of the game. Battling in a minus position against the Sicilian defence, Anurag was delighted when Kampen in severe time trouble blundered and resigned on the 47th move when his bishop got trapped.

He is not a GM yet, nor does his rating reflect his strength but S L Narayanan hailing from Kerala has undoubtedly been the most impressive Indian face in the LIC World Junior Chess Championship which has reached the halfway stage at Hotel Hyatt, Pune. In the seventh round Narayanan (2420) drew against GM Lu Shanglei (2533) of China and has logged highest points amongst the Indians in fray. 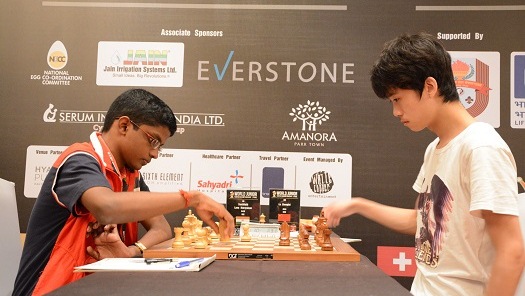 However Jorge Cori of Peru shot into sole lead with 6 points after defeating Mikhail Antipov of Russia while Lu, Narayanan, Wei Yi of China and Karen Grigoryan of Armenia are trailing in second place with 5.5 points each . In the Girls section Padmini Rout, Aleksandra Goryachkina and Daria Pustovoitova of Russia, Ann Chumpitaz of Peru and Anna Iwanow of Poland are jointly leading with 5.5 points each.

In the Girls section, the tough contest between overnight joint leaders Padmini and Daria of Russia ended with the honours shared after a hard fought 68 moves where Padmini was always on the troubled, defending side.’ It was a very tough game to defend and a mistake by my opponent helped in salvaging a draw” said Padmini.