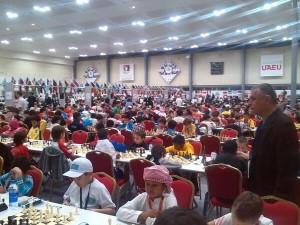 The 2013 World Youth Chess Championship started in Al Ain, UAE. With a record number of 1850 participants, this year’s edition had a mixed emotions start. Fantastic reception, massive record breaking participation, hospitality and good food, exciting chess, no live games, round delays, late arrivals, and a pinch of confusion were just some of the elements present on day 1 of WYCC 2013.

The day started with the unexpected message by the organizing committee that games will not be show online for the first round. The massiveness of the event, combined with the local’s desire to provide the needed hospitality, left out such an important element. A message was distributed early in the morning that, “games broadcast will not be conducted on the first day of the tournament”. Chessdom has been assured that starting round 2 all games will be live, bookmark the following links for the broadcast tomorrow:

Round 1 results are in and as soon as we have the games in pgn format, they will be uploaded and analysed at the live arena pages

The U16 for girls will be a very tough race between Sarasadat Khademalsharieh, Irene Nicolas Zapata, Anna Styazhkina, Iulija Osmak, Polina Rodionova, and this is obvious from the first round.

In the girls section the Greek youth star Tsolakidou Stavroula started with a victory her title bid. Her main opponents – Gunay Mammadzada, Irina Drogovoz, Anna Vasenina, and Oliwia Kiolbasa – also won their games, while Gulrukhbegim Tokhirjonova conceded a draw at the start.

No surprises were present in the girls and boys sections, with all favorites taking the full point. That brings tomorrow’s round as one of the most interesting early rounds of the history of the competition.

The Girls U10 section saw the favorites win their games. Nurgyul Salimova, Assaubayeva Bibissara, and Zahedifar Anahita had no problems on the top boards. The first (small) surprises among the top 20 boards were created by Martha Samadashvili, Yara Allam, and Berdnyk Mariia.

In the Boys U10 all went as expected with the first 22 board all proving rating matters even at this young age. Many of the games though did not lack a fight, and some of the favorites had to play at full strength right form the start.

This has always been the most unpredictable section and it has remained so this time too. Relatively low chess level, great excitement, and a lot of talent bring explosive results on the board.

See round 1 results U8