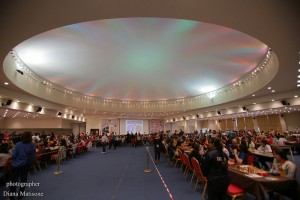 The tournament so far: “Today I had a difficult game with black. I equalized easily the opening, but then we entered in tactical complications. After a hard struggle I managed to win. Now I am at -6 ELO for the event, but I will try to recover until the end and aim at the top positions.”

About Porto Carras: “This is my 4th time in Porto Carras, and although the size of the event is big I am used to it. The hotel location and the organization is at top level and that certainly makes WYCC 2015 a good event. However, in other places it has not been like this and I think it is a good decision to divide the event in Youth and Cadets, this will add value both for the participants and the organizers.”

Next events: “I will participate in the Quatar Masters 2015. I will have the chance to play the best players in the world, including Magnus Carlsen. This is part of my plan to get my GM title as soon as possible and to keep on aiming to be one of the top players in the future.”

The event so far : “This is a difficult event for me. I had a solid start, but many players want to go for drawish lines, sometimes I push too much for the win and this is reflected in my score. I hope in the last rounds I will gain more points.”

Th organization: “I have been at many World Youth events. This is by far the best organized ever. Record breaking number of players, yet rounds start on time (believe it or not something rare for youth events!), arbiters and staff are professional. I heard soon they will divide this event in Youth and Cadets part. I will miss the massiveness, but this will give a chance to more players to play”

The future: “Chess is my life and I will keep on playing and aiming at higher positions. For the next months I will pay more attention to school, as with the WYCC this is a little behind. But then I hope to have some good events, including the National semi-final and finals. I believe I will keep on growing as I have the immense support of my family and especially my father, and also a great coach – IM Spas Kozhuharov”

The event: “I have already been in Porto Carras in 2010 and as usual everything is nice – the hotel is great, the food is great, and the weather is fantastic. I have to say I really think this is the best World Youth ever, even the bathrooms are fine, something unbelievable with so many players!”

Your games so far: “Today I won and I am at 6,0/9. It is a good score and I hope to make it even better by the end of the event. The opponents are always difficult, I will give my best. I want to thank my coach Foisor Ovidiv, and also my mother who supports not only my chess career but she is essential for everything I do in this life.”