The Armenian Chess Federation has submitted an official bid to the European Chess Union with the suggestion of holding the European Individual Chess Championship 2014 in Yerevan.

The tournament would be dedicated to the memory of Tigran Petrosian for the 85th anniversary of the 9th World Champion.

Among other news from Armenia, by the decree of President of the Republic Serzh Sargsyan, Gaguik Oganessian – the Editor-in Chief of Chess in Armenia Magazine, was awarded the title of Honored Journalist of the Republic of Armenia.

At the ceremony President Serzh Sargsyan granted the certification and medal of the honorary title to Gaguik Oganessian. 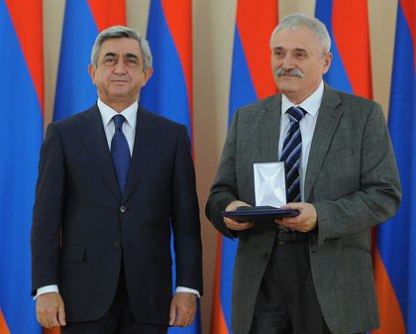