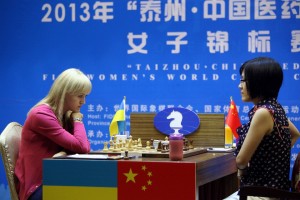 The game started well for the Ukranian player, and Ushenina enjoyed solid space advantage in the early stages. Up to move 25 she had a very nice position and all the initiative on the board. However, she fell in time trouble and at move 30 was left only with the increment, while Yifan Hou had close to thirty minutes at that point. The game turned into a one sided blitz, followed by decisive blunders at moves 36 and 37 by Ushenina. The players shook hands at move 41 when mate was imminent, and Yifan Hou took the lead in the match.