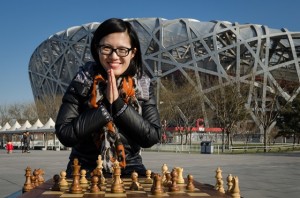 Yifan Hou is the former World Champion who is now the top ranked woman in the world (2673). She will challenge the title of World Champion Mariya Muzychuk , third on the rating list with 119 ELO less, in the 2016 World Women Chess Championship in Lviv.

Yifan Hou has recovered from that early 2015 loss to string together several successful events. A decisive victory in the Match of Friendship versus European Chess Champion Evgeniy Najer, competing the 2 day rapid and blitz event with a very convincing score 9.5-4.5. A solid win in the Women GP Monte Carlo in October, two points ahead of every other participant. 2016 is looking very promising for the former World Champion, but first up, she will be participating this January in the Tata Steel Masters 2016.

In the Tata Steel / Corus tournaments Yifan Hou has had moderate success. She has participated in 3 tournaments in the series so far. Her first event was in 2008, when she was only 14, playing in the Group B and achieving the respectful 7th place. That was followed by two main group participations in 2013 and 2015 where with fighting chess she managed to take 11th. This year she has accumulated even more chess experience and initial predictions show that Tata Steel this January might be her best Tata Steel ever, despite rating odds being against her one more time.

Peaceful round 7 of Bilbao Masters Final
The seventh day of the IX Bilbao Grand Slam Masters Final has finished and Magnus Carlsen has taken one step closer to his third ...

Aronian, Karjakin, Ivanchuk, Topalov about Tata Steel round 9
Levon Aronian, Sergey Karjakin, Vassily Ivanchuk and Veselin Topalov sharing their impressions about the 9th round matches in the Tata Steel A tournament. Replay the ...